The 2019 NBA Draft's first overall pick Zion Williamson Salary and Earnings in 2020; His Endorsement Deals, Net worth, Family, and More 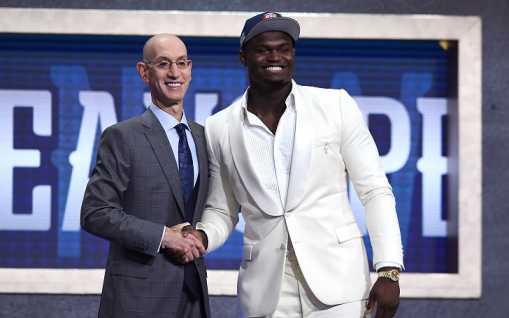 Zion Williamson, the former Duke Blue Devils power forward, was picked first overall in the 2019 NBA Draft as expected by New Orleans Pelicans. Having rated as a five-star recruit, Zion ruled the college basketball and was also awarded the prestigious college basketball awards like Consensus National College Player of the Year 2019, Wayman Tisdale Award (2019), Karl Malone Award (2019), ACC Athlete of the Year (2019), and ACC Player of the Year (2019) etc.

Soon after the NBA Draft, Zion was offered a deal by Pelicans. His earning is reaching the peak within one season of the NBA. The small forwarder of Pinnacle is earnings millions through his NBA contract.

What is the Annual salary of Zion Williamson in 2020?

He is claimed to be the next milestone of NBA and through his exceptional skills and dedication for the team, he has collected jaw-dropping $6 million as per 2020. So, through his analysis of his wealth, it is cleared that Zion already waves his name in NBA and it will be interesting to see the games of this young player in the coming days.

Second-largest rookie shoe deal in the history of NBA

Zion's earning is overshadowed due to his endorsements and sponsorship deals. Zion Williamson signed a seven-year shoe deal with Jordan Brand on Jul 23, 2019, which was worth around $75 million. While signing a deal he said,

“I feel incredibly blessed to be a part of the Jordan Brand family," Williamson said in a statement, "Since I was a kid, I dreamed of making it to the league and having the type of impact on the game Michael Jordan had and continues to have today. He was one of those special athletes I looked up to."

Williamson's deal is considered as the second-largest rookie shoe deal in the history of NBA, trailing only LeBron James' $90 million rookie deal signed in 2003. But from Jordan Footwear Brand the highest-paid player is the mighty Michael Jordan who has signed $100 million worth contract with the company.

When players became a world-recognized then they need to deal with the agency to manage their endorsements. Therefore, Williamson had made an agreement with Prime Sports before he was hired as a player.

Zion Williams has indeed been sued for $100 million by a sports marketing agency Prime Sports after an allegation of breach of contract by Zion. President of Prime Sports Marketing LLC, Gina Ford, filed suit in a court in Florida, alleging Williamson and his new agency, CAA, of fiduciary duty. The case charges Williamson and CAA for messing with Williamson's agreement with Prime Sports so they are demanding $100 million in punitive damage.

Zion grew up in Salisbury, North Carolina where he grew up in the athlete family and his natural athletic ability came from his father Lateef Williamson and Sharonda Sampson. His father Lateef played football at Mayo High School as a defensive lineman in the Darlington team.

His father was once named as 1993 High School All-American and had committed to NC State before transferring to Livingstone College. Whereas Zion Mother Sharonda was a sprinter at Livingstone and became middle school health and later on, she became a physical education teacher.

Story Behind His Name

For many Zion is just a name but their family has dug deep into the pages of Holy book Bible by his mother. On the advice from Zion's grandmother, his mom named him after the biblical site Mount Zion near Jerusalem, which makes his name something extra special.

But after the death of Zion's grandmother, his family moved to South Caroline where his mother and father got divorced while Zion was just five years old. His mother married Lee Anderson who is a retired basketball player of Clemson University.