Since 2009, he represented the Belgium U-18 national team and in October of 2011, he made his senior international debut, becoming the youngest goalkeeper to represent Belgium.

A native of Bree, Belgium, Thibaut Courtois was born on May 11, 1992. His birth sign is Taurus. Regarding his nationality, Courtois is Belgian and is of white ethnicity.

Thibaut Courtois also played volleyball in his childhood but choose football to focus. At 5, Courtois began playing for Bilzen V.V. Then in 1999, he moved to Genk.

Following various youth systems at Genk, Thibaut Courtois made his first-team debut against Gent on 17th April 2009. His performance was appreciated much and regarded as a key figure in Genk’s title victory in the “2010-11 season in the Belgian Pro League”.

In July 2011, Courtois signed a 5-year contract with FC Chelsea for a fee of €9 million.

After weeks of joining Chelsea, Courtois was loaned out to Atletico Madrid for a season-long loan deal. He was given the shirt no. 13. On 25th August, he made his debut for Atletico against Vitoria de Guimaraes in a 4-0 UEFA Europa League win. Three days later, Courtois made his La Liga debut 0-0 draw against Osasuna at the Vicente Calderon Stadium.

His loan deal was extended to cover the 2012-13 season. He started the very season playing against Chelsea in the “2012 UEFA Super Cup” final in Monaco, which results in a 4-1 win for Atletico.

And again Courtois’s loan deal was extended by a further 12 months for the 2013-14 seasons. Courtois played a total of 3 seasons for Atletico Madrid, making overall 111 appearances.

In June 2014, Courtois made his way back to his parent club Chelsea for the 2014-15 seasons. He was given shirt no. 13 which was previously worn by Victor Moses. After 3 seasons on loan, he started for Chelsea in the Premier League opener against Burnley at Petr Cech.

Furthermore, he signed a new 5-year extension contract with Chelsea on 11th September 2014, keeping him at the club until 2019.

Courtois made 126 appearances for Chelsea. Some of his teammates are Alvaro Morata, Cesc Fabregas, Eden Hazard, etc. In 2018, The player moved to Spain and joined Real Madrid.

In 2009, Thibaut Courtois was called up to the Belgium U-18 national team. He made 4 appearances for the U-18 team.

In October 2011, Courtois received the first call-up to the Belgium National Team. The following month, he made his international debut in a goalless draw against France at the Stade de France.

He was also named for Belgium’s first 8th games of their “UEFA Euro 2016” qualification campaign.

He had been listed in Belgium's national team for the World Cup 2018, along with Romelu Lukaku and Kevin De Bruyne.

Thibaut Courtois was in a romantic relationship with his Spanish girlfriend 24, Marta Dominguez. The duo first met when Courtois was on loan at Atletico Madrid. He and his former girlfriend spent a number of years together before they separated in September 2016 on amicable terms. 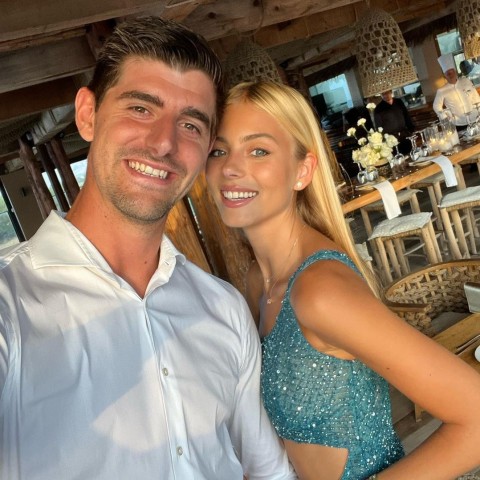 Thibaut is engaged to his fiance SOURCE: [email protected]

The ex-couple has two children, a son, and a daughter together. Their first daughter is named Adriana and had their second baby Nicolas on 2nd May 2017.

Even though the former couple doesn’t have a romantic relationship, they still are a good friend and take their responsibilities as a parent of their two children. Thibaut is engaged to Israeli model, Mishel Gerzig.

Net Worth and Endorsement of Thibaut Courtois

Apart from his football career, he too adds a good amount to his net worth through his endorsing deal with Multinational Conglomerate Company, Samsung, and the largest sportswear brand Adidas.

Courtois owns a house in Madrid, Spain. As per riding, he prefers Rolls-Royce Phantom and Mercedes-AMG C63. His current market value is $50 million.