Dalip Singh Rana better known as The Great Khali is an Indian professional wrestler, promoter and actor. He is most notable for his stint with WWE from 2006 to 2014 where he performed under the moniker "The Great Khali".

Before starting his wrestling career, Rana was an officer for the Punjab state police. Furthermore, he has appeared in four Hollywood films, two Bollywood films and several television shows.

Not only name and fame, but the wrestler has also earned huge fame from the career. As of 2019, his net worth is estimated over $6 million. Regarding his love life, he is married.

As of 2019, the Great Khali has an estimated net worth over $6 million, mostly earned through his wrestling career. According to the source, his highest-grossing incomes: WWE each salary $974,000 with a bonus of $300,000 and brand endorsements of $2.2 million.

Some of his earnings from WWE are tabulated below:

The above-mentioned figure is just an estimation. However, there aren't any concrete source to claim his actual net worth and career earnings. Additionally, he also owns a house in Dhiriana, Himachal Pradesh, India but unfortunately, the details about the valuation of his property are still undercover.

Besides, he earns much from commercials and  TV & Film appearances. Also, he has opened his own wrestling school in Punjab; he trained future wrestlers of India.

The Great Khali is a pure Hindu and follows his spiritual guru Ashutosh Maharaj. Talking about his relationship status, he is a married man. He tied the knot with a lady named Harminder Kaur. Further, the couple is blessed with a baby girl. 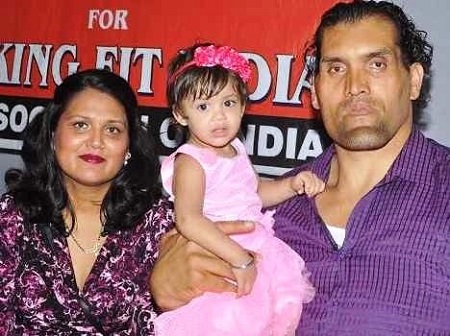 CAPTION: The Great Khali with his wife and daughter SOURCE: StarsUnfolded

Despite being a public figure, he never has been a part of any controversies or rumors. He does not have an extramarital affair and girlfriend too.

Talking more about him, he is one of the fittest men of the wrestling world; he has perfect height and weight. His height is 7 feet and 1 inch. His total weight is 384 lbs or 157 kg.

This splendid wrestler was born in the year 1972, on August 27, India is his birthplace. He is dangerous and attacking when he was in the field, his signature moves and his finishing moves are perfect. WWE provided him a perfect platform to uplift his career. He is living legends in the wrestling world. He has six siblings.

If we talk about his early life, then we come to know that, his family belongs to India; he is from a middle-class family, earlier he served as a Police in India.

In the year 2000, his wrestling career started, he gets an opportunity to play All Pro Wrestling in the United States, in his debutant game he showed his wrestling skills to the people, however, WWE provided him a perfect platform to his career.

While playing in the WWE, he has defeated several prominent wrestlers of the wrestling world. He played against several prominent stars of wrestling, for instance, The Undertaker, BigShow, John Cena and others. In the year 2007-2008, he received the title of World Heavyweight Champion. He also associated with television and films. He gets appeared on Bollywood and Hollywood movie too. He also makes his appearance on T.V Shows like Big Boss and others.