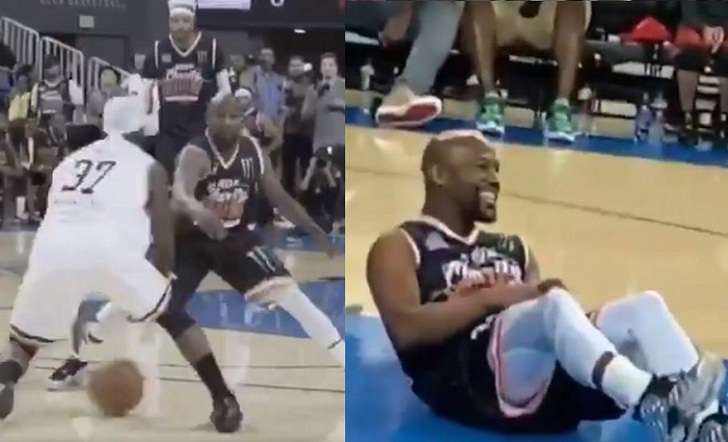 Floyd Mayweather in his 50 Pro fights was never ever knocked down even he faced absolute killers like Manny Pacquiao, Oscar De La Hoya, and even Conor Mcgregor, but in his recent attempts on a basketball court, got Floyd on his back.

The boxing legend while taking part on the Los Angeles Monster Energy 50 K Charity Challenge chose to oppose a streetball legend Streetball Star Larry Williams AKA Bone Collector who got his nickname for dropping people on the court.

Mayweather is no longer undefeated.

The former boxer in a charity event hosted by Monster Energy, Middle-Name-Money tried defending against Larry which obviously didn't go that well for Floyd Jr.

Although advertisers warned Mayweather, not to go against the Bone Collector Williams still attempted to defend the bone collector. However, Williams in a cross-sports event Los Angeles Monster Energy 50 K Charity Challenge was able to do the impossible to the boxer, meaning he flattened Floyd on his back and made him walk funny. Reportedly, Floyd broke his Ankle while defending the Bone collector.

Mayweather was the recent victim of the Bone Collector, who gained his name from breaking legs and dropping people badly, and the collector now has a new name added to his list of victims "Floyd Mayweather". See the video below.