Sterling Clay Shepard a.k.a. Sterling Shepard is an American football wide receiver who is currently signed to the New York Giants of the National Football League (NFL). He finished his collegiate career at Oklahoma and was drafted by the Giants in the second round of the 2016 NFL Draft.

A native of Oklahoma City, Oklahoma, Sterling Shepard was born on 10th February 1993, under the star sign Aquarius. The twenty-seven years old holds an American nationality and belongs to the Afro-American ethnic background. Regarding his physique, he stands 5 ft 10 in (1.78 m) tall and weighs 194 lb (88 kg).

How Much Is Sterling Shepard's Net Worth?

As of 2020, Shepard's net worth is approximately $10 million. For sure, the wide receiver has a lavish lifestyle and owns real estate properties and cars but has maintained it a low key.

Sterling Shepard's Wife: Is He Married?

Sterling Shepard married Victoria's Secret model, Chanel Iman. The couple met for the first time in November 2016 at Victor Cruz's birthday party. After that, the couple started seeing frequently and ended up dating each other. In December 2017, they got engaged. 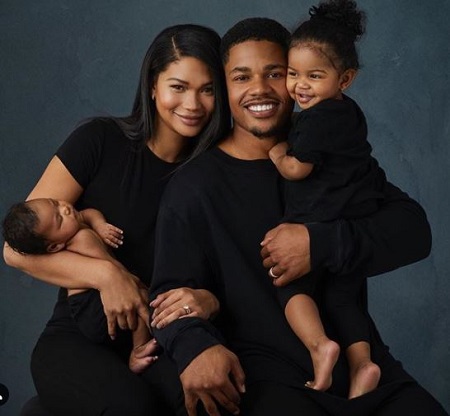 Sterling Shepard was born to Cheri Shepard and Derrick Shepard, was an American football wide receiver in the National Football League for the Washington Redskins, New Orleans Saints, and Dallas Cowboys. He died on 4th August 1999 at the age of 35 from a sudden heart attack he suffered while playing racquetball. His uncles, Darrell (1980–81) and Woodie (1975–79), also played at Oklahoma.

Heritage Hall School in Oklahoma City, Oklahoma. In his high school football career, he rushed for 1,115 yards and caught 133 passes for 2,335 yards and 38 touchdowns. He committed to the University of Oklahoma to play college football.

In the 2016 NFL Draft, Shepard was selected by the New York Giants in the second round with the 40th overall pick, becoming the fifth wide receiver to be selected that year. He made his Giants debut in the team's season opener against the Dallas Cowboys and made three receptions for 43-yards helping the Giants win 20-19.