Odell Cornelious Beckham Jr. widely recognized as Odell Beckham Jr. is an American football wide receiver playing for the Los Angeles Rams of the National Football League. Following his successful college career at Louisiana State University, he was picked in the first round of the 2014 NFL Draft with the 12th overall by the Giants. Also, he played for the Cleveland Browns (2019–2021).

Net Worth and Salary of Odell Beckham Jr.

He previously signed a five-year/ $95 million contract with the New York Giants in August 2018 which made him the highest-paid wide receiver in football. The deal included $5 million in incentives.

Like many other professional athletes, he also earns a significant sum of money through endorsement deals with companies like Steiner Sports, Nike, EA Sports, Foot Locker, and others.

Odell Beckham Jr owns a few of the best luxury cars in the world. The Car brands owned by him include Mercedes, Porsche, and Buick. He has the best Luxury houses in New York. He bought this House in 2014. Estimated Value of this Real Estate Property around $4 Million.

Professional footballer, Beckham is at the age of 29 now and has balanced his career and personal life. He looks very open to sharing his personal information as for his post on social networking sites and is seen on Twitter with high fan followings. There was much gossip about his relationship with Amber Rose but there is no factual information that has been revealed about this couple. Apart from this, he was rumored to be dating Iggy Azalea. 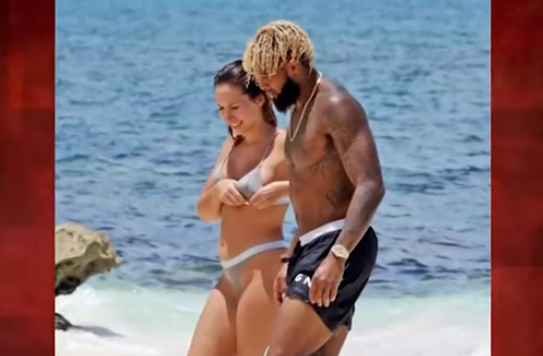 The pair were seen at Six Flags Magic Mountain last spring holding hands and riding roller coasters. Then, in July, the couple was seen in Cancun together. His girlfriend, Ferfeli took their relationship to social media by posting a video of her in bed with OBJ. The couple kissed each other in the video.

Later it is rumored that the two broke up and again reunited and then broke up again.

Currently, he is in a relationship with Lauren Wood, a fitness trainer. In December 2021, he announced the couple is expecting a baby.

He was born and raised in Baton Rouge, Louisiana, the United States along with his brother, Kordell Beckham, and sister, Jasmine Beckham. He is the grandson of Millie Van Norman (his grandmother) and Don Van Norman (his grandfather). He attended Isidore Newman School and further joined the Louisiana State University.

He attended Isidore Newman School in New Orleans, Louisiana, where he was a letterman in football, basketball, and track. He has played as a wide receiver, quarterback, running back, and cornerback and caught 45 passes for 743 yards and 10 touchdowns as a junior while also adding three more scores on the ground.

He gained 50 catches for 1,010 yards and 19 touchdowns, joining Cooper Manning as the only two players in school history who recorded 1,000 receiving yards in a season as a senior. He has participated in basketball, track, and soccer in addition to the football and lettered all four years and was an all-district selection in basketball during his junior and senior years.

He has also played soccer in his career and was regarded as a four-star recruit by both Rivals.com and Scout.com. He was rated as the No. 6 wide receiver and as the No. 40 player in the nation during that period. Beckham had 10 catches for 146 yards and two touchdowns, including a one-handed touchdown reception hailed as the "catch of the year", with LeBron James saying that it was one of the best catches ever.

He has played in the Army All-American Bowl in the year 2011.

Odell Beckham Jr. started 9 of 14 games scoring 41 receptions for 475 yards and two touchdowns as a true freshman at LSU in the year 2011 and was entitled to a freshman All-SEC selection. He started 12 of 13 games and finished first on the team in receiving yards with 713 and second in receptions with 43 during his second year in the university.

He has combined with Jarvis Landry and formed one of the best wide receiver duos in college football as a junior in the year 2013. He finished the season with 57 receptions for 1,117 yards and 8 touchdowns.

In the 2014 NFL Draft and he was selected as the twelfth overall by the New York Giants after the season. Further, he signed a contract with the Giants on May 19, 2014.