Micah McFadden is a rising American football player. He is currently playing in the National Football League for the New York Giants. Micah turned professional in 2022 after the Giants drafted him in the fifth round, overall 146th pick. McFadden plays as a Linebacker for his club.

Micah McFadden was born on January 3, 2000, in Tampa, Florida. He is the son of Deborah McFadden and Douglas McDaffen. He has not shared much about his parents and his early life. Micah graduated from Plant High School and enrolled at Indiana University. McFadden stands six feet and one inch tall and weighs 109 kg.

Micah McFadden has an estimated net worth of more than $500,000. The player has earned most of his net worth through his contract and salary with the giants.  McFadden received an estimated $88,927 as his signing bonus in 2022. 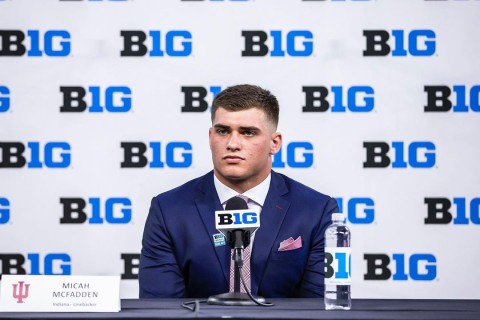 Who is Micah McFadden Dating? Know About His Girlfriend and Relationship Status

Micah is pretty private about his relationship status. The linebacker has not shared a word about his love life. McFadden could be single, dating or even engaged. Although he is an active social media user, The player has not shared a picture except for his games and training.

Micah is very early in his career and must focus on making a good career. He is very close to his family and friends and likes to spend his free time with them.

Journey to the NFL and New York Giants

Micah started playing football in Middle school. He trained with his head coach Robert Weiner at High School. McFadden was named 2017 FACA Player of the Year and first-team All-Western Conference selection. In his junior year, The player earned first-team all-state, all-county, and all-conference honors. After completing High School, He enrolled at Indiana University with an SPEA management major.

Micah was named for the university Men's football team and played twelve games. In his sophomore year, The player was named into academic All-Big Ten selection and earned Honorable-mention All-Big Ten and IU’s Most Outstanding Defensive Player of the Year. Micah led the team with fifty-eight tackles for his junior year and was honored as Indiana’s Anthony Thompson Most Valuable Player.

McFadden led the team as their captain in his senior year. The player was named to several teams for the final year. He finished his career with 216 tackles, 149 solos, and 14 sacks. After graduating from the University, Micah listed his name for the 2022 NFL draft. New York Giants drafted him with the 146th pick in the fifth round.