Stanley Umude is a professional basketball player who currently plays for the Motor City Cruise of the NBA G League. Besides, he is positioned as a shooting guard and Umude also played college basketball for his college team Arkansas Razorbacks, and the South Dakota Coyotes.

American basketball player, Stanley was born on  April 12, 1999, and he is a native of Portland, Oregon, U.S. Likewise, Stanley started playing basketball in his high school where he earned  All-District honors. Additionally, he attended Arkansas where he spent a season.

Stanley is possibly single as the American basketball player has never mentioned his lovelife openly on the web sources. He has kept his dating career barred from media sources to keep his foot away from unwanted rumors.

Likewise, Stanely is also not much active on social media sources, therefore, it became more challenging for us to say whether he is dating, single or engaged. However, most of his fans expect him to be seeing someone in private rather than making an open announcement.

The Portland-based Shooting guard, Stabley began his career as a basketball player and he joined  Earl Warren High School in San Antonio, Texas where Stanley also received all All-District honors. Further, as a senior, he recorded 23.2 points, 6.2 rebounds, 2.4 blocks, and 2.1 assists per game. 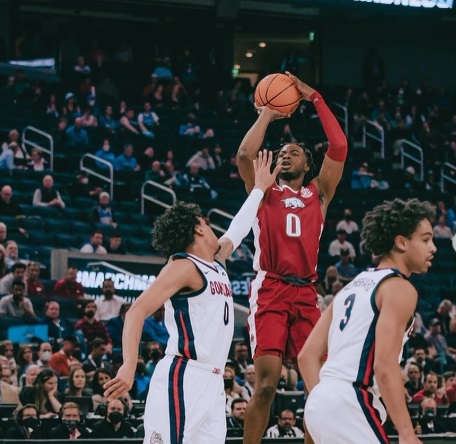 In his college career, Stanley recorded  1.1 points per game. Likewise, on January 30, 2019, Umude scored a career-high 32 points. On November 25, 2020, he made his professional career debut where he averaged 24 points.

While talking about his professional career, he signed an Exhibit 10 contract with the Detroit Pistons Umude was also named to the opening night roster for the Motor City Cruise.

His Birth Date- How Old Is Stanley?

The professional basketball player, Umude was born on April 12, 1999, in his birthplace, Portland, Oregon, U.S to his parents who emigrated from Nigeria. Besides, he holds an American nationality.

More, there are no proper details available regarding his early career and parents as Stanley prefers to keep his bloodlines away from the media reach and free from media controversies.

Has Stanley Declared His Name In NBA? His Salary Explored

The College basketball player, Umude's net worth is currently missing from the online portals and his salary details have also remained a mysterious topic for us. Similarly, Umude was undrafted in the 2022 NBA however, the first-year salary for an NBA player is $9,212,600 so he would have earned the same range or more than that. Other than that, he might add valuable money to his bank account in the future when he will play in professional clubs. Formerly playing for the Motor City Cruise, Luka Garza received an average salary worth  $1,244,388.

Umude is available on various social media handles, however, he prefers using Instagram and Twitter over any other online media platforms where he shares his posts with his fan.