Luka Garza is an American college basketball athlete who currently plays for the Detroit Pistons in the National Basketball Association. As a junior, he was named a consensus first-team and Big ten Player of the year. He played for the Maret School, where he was a four-star recruit.

Washington, D.C. native Luka Garza was born on December 27, 1998, under the star sign Capricorn. The twenty-three-year-old is an American by nationality and belongs to the white ethnic background.

Garza is very early in his career and will be making millions in the future. The median salary, or median salary among all NBA players, is $2.96 million. Golden State Warriors star Stephen Curry is the highest-paid NBA player this season, earning $40.2 million.

Luka enrolled at the Maret School in Washington, D.C. but could not dunk a basketball until he was a sophomore. He averaged 24.6 points, 11.7 rebounds, and 2.5 blocks per game as a senior.

A four-star recruit, Luka chose to play college basketball for Iowa over offers from Georgetown, Georgia, and Notre Dame, among others.

Luka listed his name for the 2021 NBA draft. The Pistons drafted him in round two, overall 52nd pick. He signed a two-year contract with the club and won several awards in his debut season, playing with Motor City Cruise in the G League.

Luka was born to Frank and Silja. Belongs to half-Bosnian descent, Luka's father is of American origin, and his mother is from Bosnia and Herzegovina, of Bosniak origin. Further, both of his parents have basketball experience: his father played for the University of Idaho. His mother played professionally in Europe and is now an executive assistant at the Embassy of Bosnia and Herzegovina in Washington, D.C.

His paternal grandfather, James Halm, played college basketball for Hawaii. More, his maternal uncle, Teoman Alibegovic, is the all-time leading scorer for the Slovenia national basketball team. His grandfather Refik Muftic, on his mother's side, was an accomplished goalkeeper who spent his entire career in FK Sarajevo.

Who is Luka Garza's Girlfriend?

Luka Garza is pretty famous on Instagram, with 112k followers. Keeping updates with his socials, it is known that Luka is dating Maggie Mynderse. Not confirmed, it is assumed the duo met each other in college and started dating during their college days. 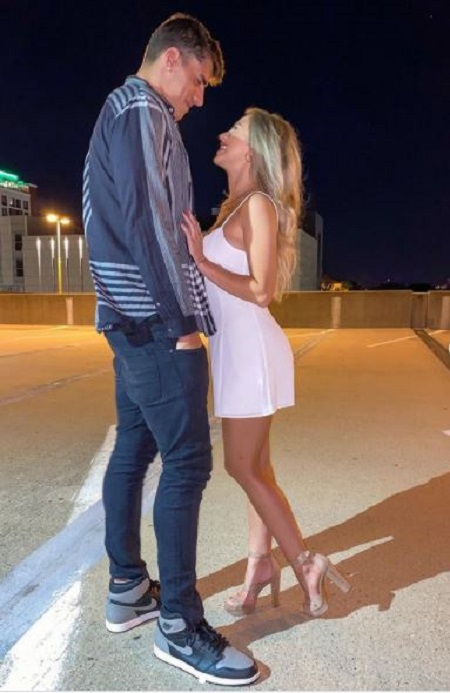 Garza is an expressive person who often shares a picture with his girlfriend. On the other hand, Maggie is the opposite, who has set her Instagram account private and enjoys life behind the camera. However, she visits her boo during the game.