Bogota, Colombia native, Samuel Vargas was born on 12th April 1989, under the star sign Aries. The thirty-one years old holds a dual nationality Colombian and Canadian. He stands 5 ft 9 in (175 cm) tall and weighs 72 in (183 cm).

Not to mention, the major source of boxers' income is from competing in the ring. Boxers make fortune a split of the “fight purse” for fighting in a boxing match. Besides, endorsements are one of the best ways for professional boxers to earn outside of the ring. According to the source, the median salary for a professional boxer is $51,370.

It's been over a decade that Samuel Vargas is active as a professional boxer. Though there is no record of how much he makes the per fight, he is believed to make no less than the five-digit figure. As of 2021, his net worth is  $0.3 million.

Samuel Vargas Is A Proud Father

Samuel Vargas is a quite confidential person when it comes to his personal life. Though he has not shared much information about his family, he often shares pictures with his adorable son, born in 2009. 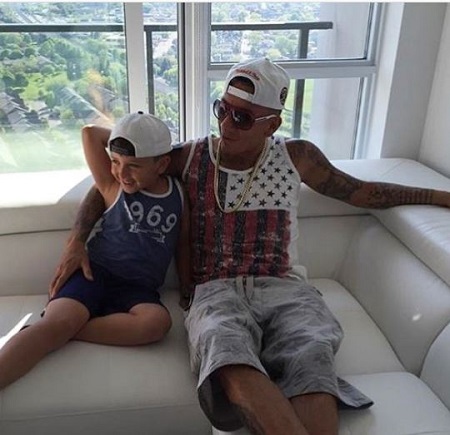 The fighter is married too but there is not much information about his wife. Seems like Samuel does not want any extra attention to boxing career due to his personal matters.

On 6th February 2010, Samuel Vargas made his professional debut at Todd Furler. He won the fight via TKO. Following eight-fight, he ultimately won his career's first career title, NCC welterweight title in a fight against Manolis Platis. After that, he had two more wins and won his career's second title, WBA-NABA Canada super welterweight title against Julius Bunda on 9th April 2013.

On 10th April 2021, he faced Conor Benn for the WBA Continental welterweight title. He lost the fight via TKO in round one.