Went from driving a forklift in a warehouse to a Championship, Sam Eggington is one of the famous British boxers. He has held the British and Commonwealth welterweight titles (2015-2016), as well as the European welterweight title (2017). A professional since 2012, he has compiled a professional record of 28-7-0 (win-loss-draw).

Birmingham, West Midlands native, Sam Eggington was born on 15th October 1993, under the star sign Libra. The twenty-seven years old holds a British nationality and is of white ethnic background. Nicknamed The Savage, he stands 5 ft 11 in (180 cm) tall.

As of 2020, Sam Eggington has an estimated net worth of $0.7 million. The significant source of his income is through prize money, which he receives for winning and participating in fights because there's really no typical salary. The average salary of a professional boxer is reported as $51,370. Only the top 1% of all professional boxers earn more than a million dollars per year such as Anthony Joshua, Canelo Alvarez, and Floyd Mayweather.

Besides ring sponsorship plays a vital role in making money for the boxer. Sam is currently sponsored by Phenom boxing, Suziwong Creations, Everlast, and The Skinny Food.

Before turning pro, he asked his trainer if he could become a journeyman because they are always earning money, he said.

Sam Eggington's Wife: Is He Married?

Sam Eggington is a married man. He exchanged the vows with his long-time girlfriend, Charlotte in an intimate ceremony. The exact date of their wedding is yet to disclose. Also, the couple is yet to come out with their love story. The subjects like when did they met or when they started are still under the shades. 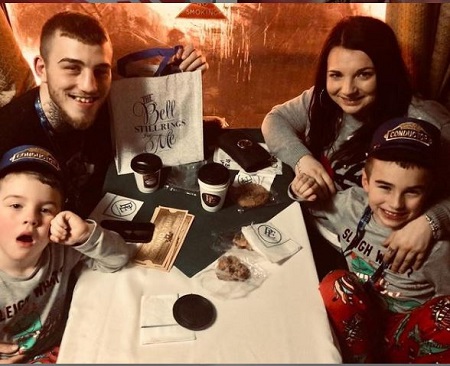 The couple shares three adorable children: Layton, Kai, and Laila. Eggington often features his family on IG whereas his wife is a lowkey person and sets her IG private.

Rebounding from the loss, he defeated Frankie Gavin and won the vacant WBC International welterweight title, and retained the title in the following fight. Further, he won the European weleterweight title against Ceferino Rodriguez on 13th May 2017 but lost the title on 17th October against Mohamed Mimoune. In 2018, he had three fights and the major win was against Peter Kramer where he won the vacant IBO Continental light-middleweight title. Similarly, in 2019, he had an overall six-fight and the major win is the IBF International light-middleweight title on 19th September 2019 against Orlando Fiordigiglio.