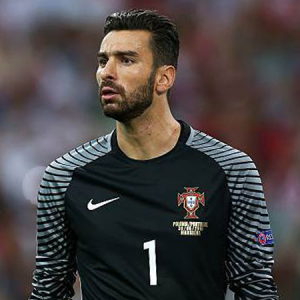 A native of Marrazes, Portugal, Rui Patricio was born on 15th February 1988, to Belize Patricio and Rui Patricio. His birth sign is Aquarius. Regarding his nationality, Patricio is Portuguese, and he is of African ethnicity. He grew up alongside his sister Nidia Santos.

At a young age, he played as a striker for Leiria e Marrazes. Then in 2000, he switched to Sporting Cp.

Following various youth levels in Sporting CP, Patricio made his Primeira Liga debut on 19th November 2006, against C.S. Maritimo in a 1-0 away victory.

On 27th November 2007, Patricio made his UEFA Champions League debut against Manchester United in a 1-2 group stage defeat.

On 20th December 2012, Patricio won the “Sporting’s Footballer of the Year Award” for a second consecutive year.

On 24th October 2016, Patricio was shortlisted for the “2016 Ballon d’Or Award” alongside Portugal teammates, Cristiano Ronaldo and Pepe. On his 400th game for Sporting CP, he was awarded the Man of the Match award in their 1-0 home victory over Rio Ave FC.

Since 2003, Rui Patricio has been representing his national side junior team in several tournaments.

On 17th November 2010, he made his international debut for Portugal against Spain in a 4-0 friendly victory. Further, he made his appearance in the Euro 2012 qualifying campaign in 5 games as a Portugal qualified for the final stage.

Furthermore, for the “2014 World Cup," he was included in Bento’s 23-man as a first-choice and made his competitive debut in the encounter against Germany in a 0-4 defeat.

So far, he has won 68 caps his national side.

29 years of age, Rui Patricio was married to Joana Pereira. The happy couple tied the knot in June 2011; however, only months later they divorced. The pair had been in a relationship for 7 years. During the divorce, the ex-couple agreed on the division of property, including a house in Alcochete, Montijo.

He then began dating Portuguese model Liliana Aguiar, who is well known for Big Brother in 2001. But like his previous relationship, Patricio and Aguiar separated after some time.

As per our record, he is possibly single as he has not revealed anything about his affair in front of media or public.

Net worth and Endorsement

As of 2017, Rui Patricio has an estimated net worth of $10 million. His significant source of earning is football. Besides, he too makes much from his endorsement deal with many brands including Nike.