Rich Paul is an American sports agent who is well recognized as a founder of Klutch Sports Group. Also working as the CEO of the sports agency, Klutch represents a number of prominent NBA players, in addition to NFL players in more recent years.

Cleveland, Ohio native, Rich Paul was born on 16th December 1981, under the star sign Sagittarius. The thirty-nine years old holds an American nationality and is of white ethnic background.

Paul is the son of Rich Paul Sr. He grew up in harsh conditions and poverty in a one-room apartment over his dad’s store, R and J Confectionery, located in Glenville, Cleveland’s area on the east side. He studied in the private, fee-paying Benedictine, a Roman Catholic high school.

Upon graduation from high school, Paul started buying throwback jerseys from Atlanta and selling them out of his trunk in Cleveland after he was mentored by Distant Replays owner Andy Hyman on selling vintage jerseys.

In 2002, he met Lebron James at the Akron–Canton Airport. James was impressed by Paul's authentic Warren Moon throwback jersey and ended up exchanging contact information.

In 2003, Paul joined LeBron James after the NBA Draft being a part of his small inner circle alongside James' childhood friends Maverick Carter and Randy Mims. Later, he worked under Leon Rose, who had negotiated James' extension with the Cavaliers in 2006, at Creative Artists Agency.

In 2012 Paul start his own agency, Klutch Sports Group, along with James.

By 2019, Klutch had a roster of 25 clients and brokered over $1 billion in contracts.

In 2020, United Talent Agency (UTA) began a partnership with Klutch where he expanded the division's clients from 4 to 23. That year, he became UTA's board of directors. Paul was included in the 2020 "Ebony Power 100 List".

Who Is Rich Paul Dating? Know His Girlfriend

It is official that Paul and pop superstar Adele are dating. Both gave frequent public appearances, especially during NBA games.

Not much is known about the relationship nor its impetus, but it's possible the two have been an item since as early as May 2021. 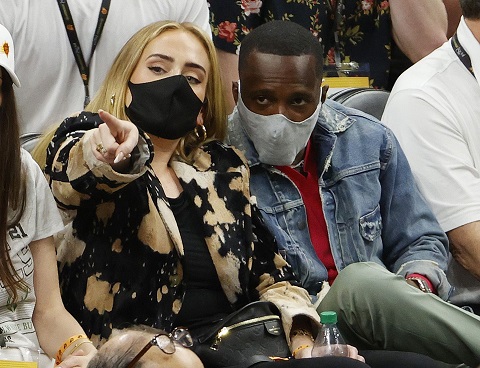 Rich Paul is in a relationship with the English singer-songwriter Adele as of 2021
SOURCE: ELLE

As per Adele's interview with the publication “Vogue”, while promoting her latest album, she first said “Hello” to Paul at a party, where he stood out because of how much he was dancing.

International Business Times reported that the total value of the contracts Paul obtained in 2019 is calculated to be around $800 million. In 2019, he earned $32.6 million in commissions from deals he negotiated.

The talented sports agent earns $30 million in commissions personally each year. He was the third-most financially successful NBA agent in 2020. In October 2019, NBA agent Rich Paul scored a house in Beverly Hills for $11.7 million. The two-story home was built in 2019 which comes with a gym, Peloton bike, sauna, steam room, cold plunge, and three months' worth of cold-pressed juice deliveries and in-home yoga lessons.

He has another home in West Hollywood, California.