Rene Marquez is an American professional boxer who competes in the super-light division. Turned professional in 2012, he has compiled a record of 5-6-0 (win-loss-draw). Besides, he has opened an MMA organization as well as a kickboxing class.

Rene Marquez's Net Worth and Earnings

Not to mention, boxers make money by winning boxing matches and also by securing sponsorship and becoming an ambassador for the sport. But, Rene who is no where to be found on Instagram or Twitter has not reveled about his endorsements or seen promoting any brands or products to date.

Besides, he owns PanhandleMMA as well as takes cardio, kickboxing class @AnyTimeFitness @5:00 a.m
Cardio, Kickboxing class @PrairieWindsCommunityCenter, which are also source of his income.

When it comes to personal life, Ren Marquez is a quite confidential person. There is less to no information available regarding his love life. Nowadays, IG has been the popular platform to flaunt pictures of their love one but the boxer remains inactive in socials. That's why its even to find his relationship, girlfriend, or wife.

Currently at his thirties, he might be in relationship or have already married. Aforementioned, his life is lowkey. Hence, Rene Marquez is believed to be possibly single.

On 20th October 2012, Rene Marquez made his professional debut at VFW Post, Gering, defeating Cody Land via KO. In the following bout, he won against Lynel Burton at Boulder County Fairground, Longmont. On 8th June 2013, he fought against Angel Smith Torres at Five Rocks Amphitheater, Gering, winning the bout via unanimous decision. Later two months, he defeated Kevin Benson via unanimous decision. After that, he had two losses against Joey Munoz and Jeremy Ramos in 2014 and 2015. 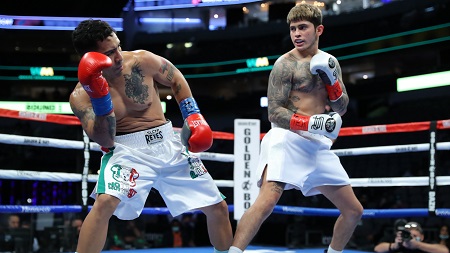 Rebounding from loss, he marked a victory over Diego Nolasco at Scottsbluff County Fair Grounds, Scottsbluff via unanimous decision. Following that bout, he had a series of loss including his current last against Sean Garcia at American Airlines Center, Dallas on 2nd January 2021.

He is suspended by Texas Combative Sports Program until 15th January 2021.