Larry Bird is an American former basketball executive, coach, and player who most recently served as president of Basketball Operations for Indiana Pacers in the National Basketball Association (NBA). As a player, he played for the Boston Celtics, from 1979 to 1992.

West Baden Springs, Indiana native, Bird was born on December 7, 1956, is one of the most respected names in the history of the NBA, he is widely recognized as "Larry the Legend". He holds an American nationality and is of white ethnic background.

Larry Bird Net Worth and Endorsements; How much is his Salary?

As we mentioned above the Iconic NBA player has an estimated net worth of $55 million in 2020. He used to earn an annual salary of about $3 million on average during his playing career. He made the career earnings of about $24,070,000.

Bird recently has an average earning of $2 million every year.

As for riding he has a pacer’s “Indy” Car, fully retrofitted and street legal. Being the president of the Indiana Pacers the 60 years old NBA Legend receives an annual average salary of $1.5 million.

Larry Bird owned a house in Naples, Florida which he listed for sale for $4.8 million in 2016. Besides, he has several other houses in Orange County, French Lick, and Southborough Massachusetts, etc.

Larry Bird is a married man who has been through a struggling relationship as well. Janet Condra is his first wife with whom he lived for about one year together and got divorced. They were married on November 8, 1975, but divorced the next year on October 31, 1976.

Condra was his high school classmate and first met each other at Spring Valley High School. They have a daughter together named Corrie Bird. 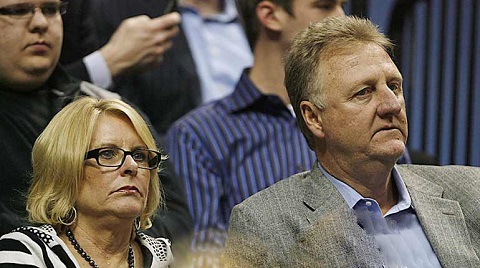 Larry Bird then married Dinah Mattingly on September 30, 1989, who he met while studying at the Indiana State University. The couple has two adopted children named Conner Mariah.

Larry Bird was born on as Larry Joe Bird to parents: Georgia and Claude Joseph "Joe" Bird, a veteran of the Korean War. He attended Springs Valley High School.

Bird has four siblings' all brothers named Mike, Mark, Jeff, and Eddie. His brother Eddie is also a former basketball player who played for Indiana State.

Larry Bird started his basketball career at the Springs Valley High School averaging 31 points, 21 rebounds, and 4 assists as a senior on his way to becoming the school's all-time scoring leader. He was picked by the Boston Celtics with the sixth overall pick in the 1978 NBA draft.

Bird agreed a five-year, $3.25 million contract with the team making him the highest-paid rookie in league history at the time. With averages of 21.3 points, 10.4 rebounds, 4.5 assists, and 1.7 steals per game for the season, he was selected to the All-Star Team and named Rookie of the Year.

Bird joined Magic Johnson and Michael Jordan and other NBA stars to play for the United States basketball team in that year's Olympics in Barcelona, Spain in 1992. on August 18, 1992, Bird announced his retirement as an NBA player.