Pedro Henrique Lopes Munhoz a.k.a. Pedro Munhoz is a Brazilian MMA fighter who is currently signed to the Ultimate Fighting Championship (UFC) under the Bantamweight division. A professional since 2009, he previously competed for FF, EFC, RITC, and RFA. As of 14th July 2020, Munhoz is ranked 5th in the UFC bantamweight rankings.

Pedro Munhoz has earned a great deal of money through his MMA career especially from UFC where he is currently signed to.

Pedro is married to a Yoga teacher, Varinea Llerena-Munhoz. The duo tied the knot in September 2012, in an intimate ceremony. In 2014, the couple welcomed their daughter, who soon became the apple of daddy's eyes. The baby girl gets often features on her dad's Instagram. 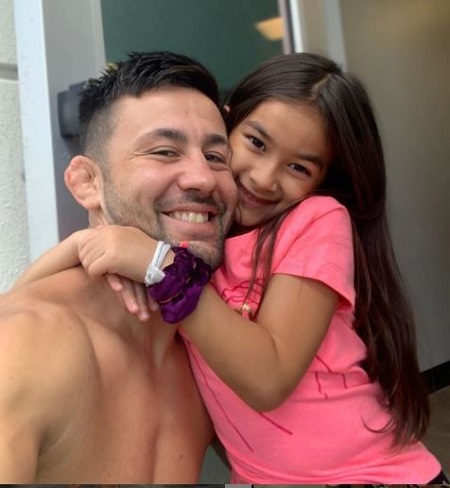 Pedro and his wife share a very strong bond. The couple is living a blissful life without any news of conflict, extra-marital affairs, and divorce in their relationship.

Pedro was born to Brazilian parents: a mother who does not watch MMA but she helps any way she can and a father who was a boxer. Knowing the pressure of the game, his dad has always helped him to pave a career in MMA. Besides, there is no information about his siblings and academic background.

On 22nd 2014, Munhoz made his UFC debut at UFC 170, where he lost to Raphael Assuncao via unanimous decision. He next faced Matt Hobar at The Ultimate Fighter Brazil 3 Finale: Miocic vs. Maldonado. He won the fight via TKO. Originally, he won his third UFC fight against Jerrod Sanders but overturned the decision after he tested positive for the exogenous origin of testosterone.

On 7th November 2015, he was defeated by the Jimmie Rivera at UFC Fight Night: Belfort vs. Henderson 3. After a series of a win against Russell Doane, Justin Scoggins, Damian Stasiak, and Rob Font, Pedro lost to John Dodson at UFC 222 on 3rd March 2018.

On 4th August 2018, he faced Brett Johns at UFC 227. He won the fight via unanimous decision. In 2019, he had two fights: against Cody Garbrandt which he won via KO punches, and the next he was defeated by Alijmain Sterling.