Cody Garbrandt is an American professional mixed martial artist who currently competes in the Ultimate Fighting Championship (UFC), under the Bantamweight division. He made his professional MMA debut in 2012. He is only the second fighter who defeated Dominick Cruz at UFC 207. He is #4 in the UFC bantamweight rankings, updated on February 9, 2021.

A former Bantamweight champion, he lost the Bantamweight Championship match to T. J. Dillashaw via TKO at the UFC 227. He is currently married to his girlfriend Danny Pimsanguan and has a child with her.

Cody Garbrandt Net worth and Earnings

His Recent contract with UFC reportedly pays him $200 thousand per fight. Further his UFC 207 appearance against Dominic Cruz which made him a UFC bantamweight Champion won him a total sum of $280 Thousand. He reportedly earned $200,000 to show up and was awarded a $50,000 Fight of the Night bonus and $30,000 for Reebok sponsorship.

Cody Garbrant reportedly tied the knot to his longtime girlfriend Danny Pimsanguan on July 29, 2017. The couple earlier announced their engagement in April 2017, via a lovely Instagram post.

Garbrandt's wife Danny Pimsanguan, the Wet Republic model and Bantamweight contender had an affair for about two years now. They revealed their engagement news in April 2017 via an Instagram post. 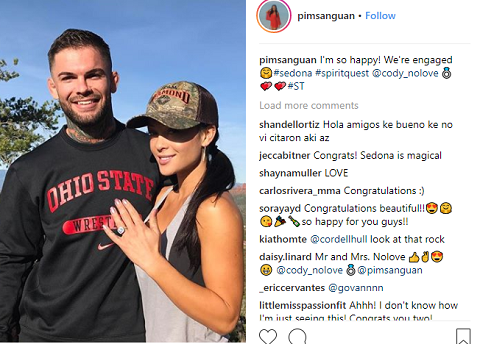 In 2018, Danny changed her surname from Pimsanguan to Garbrandt, which leaked the news of their marriage but the details of their marriage are still not addressed by the fighter or his model girlfriend. Further, The 26-year-old former UFC Bantamweight Champion and his wife Danny welcomed their first child, son Kai Fisher Garbrandt, on Monday, March 12.

If you check Cody's Instagram or his girlfriend's posts, they are seen sharing lovely photos of their newborn Kai every now and then. 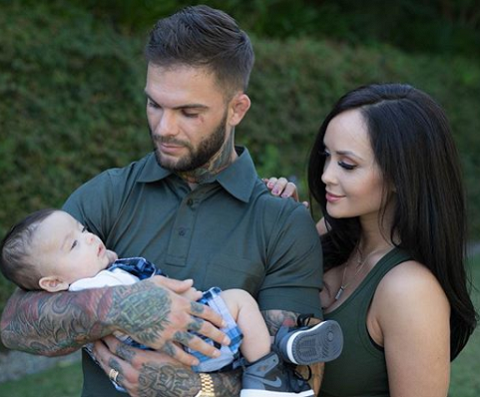 CAPTION: From Left: Cody, his girlfriend Danny, and his newborn son SOURCE: Cody No Love Instagram

His girlfriend Danny is from a Thai background and has a sister named Lena.

Cody Garbrant was born on July 7, 1991, in Uhrichsville, Ohio, the United States to Jessica Enos. Regarding his nationality, he is American and belongs to white ethnicity. His star sign is Cancer.

Cody Garbrant was raised in his birthplace. He started boxing at the age of 15. He was properly trained by his uncle, who was an Olympic alternate in the sport.

At Claymont High School, he excelled in wrestling and football. He went to Newberry College and Notre Dame College before dropping out and worked as an MMA instructor as well as a construction worker before turning into a pro-MMA fighter.

Cody Garbrant made an amateur record of 6-3 before making his professional debut in 2012. In fall of 2014, he signed to the Ultimate Fighting Championship. On January 3, 2015, at UFC 182, he made his debut against Marcus Brimage. He won the fight via TKO in the third round. On July 11, 2015, at UFC 189, he faced Henry Briones and won the fight by unanimous decision.

On Feb 21, 2016, Cody Garbrant was expected to face John Lineker at UFC Fight Night 83. However, he was pulled out of the fight.  That year, he had 4 fights against Augusto Mendes, Thomas Almeida, Takeya Mizugaki, and Dominick Cruz.

He lost the Bantam Championship match to T. J. Dillashaw via TKO at the UFC 217 in November 2017 and also lost the rematch to him at UFC 227 on August 4, 2018. He later fought Pedro Munhoz at UFC 235 in March which was awarded the fight of the night.

He has an outstanding MMA record of 12 wins in 15 fights.

Cody Garbrant has reached 29 years of age as of 2021. He has a height of 5 ft 8 inches, which is around 1.73m. His weight is around 61 kg. He is popular for his tattoos. He has inked a tattoo on several parts of his body. One can see his profiles on Twitter, Instagram, and Facebook. Moreover, info about his life and bio can be taken from Wiki.