Paul Romanuk is a famous sportscaster currently working for Sportsnet. Known for his appearance in The NHL Tonight, Paul Romanuk is working for the show since 1989. He is a known tv sportscaster who mostly appears with Caroline Cameron, Gregg Zaun, and Hazel Mae. Further, he is also known for television play-by-play reporter for Toronto Maple Leafs and the NHL on Sportsnet.

The resident of Ontario, Paul Romanuk, reportedly earns around $51,000 dollars, as his yearly salary from the network, and as of 2018, he reportedly has an estimated net worth of over $1.5 million dollars. He is currently married to his longtime girlfriend, Kari Romanuk.

Paul Romanuk was born on October 31, 1961, in Oshawa, Ontario, Canada. He holds a Canadian nationality and belongs to White ethnic group. Further, his zodiac sign is Scorpio.

From 1981 until 1984, Romanuk worked as a volunteer in Toronto Marlboros Sunday broadcasts on CKLN-FM, Ryerson's campus radio. He began as a stats and technical equipment guy for the play-by-play announcer Michael Landsberg.

In 1983, Romanuk, still a student at Ryerson, got his first paid job in broadcasting after he was hired to as a color commentator for Oshawa Generals junior hockey on CKAR 1350 AM radio alongside play-by-play man Mike Inglis. By the year 1984, Inglis moved on and Romanuk took over the play-by-play duties and worked until 1987. 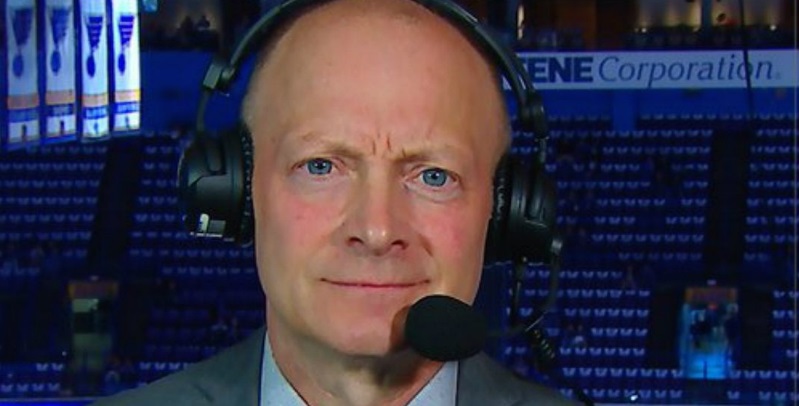 Ultimately, Romanuk got hired to host the OHL Game of the Week presentation during the 1986-87 season on Global Television Network. In October 1987, Romanuk started at TSN as a full-time commentator and reporter.

He announced National Hockey League's play-by-play games for the NHL on TSN and was the secondary TSN hockey play-by-play voice behind Jim Hughson. Hughson left TSN and from the 1994-95 season to the 1997–98 season Romanuk was the network's lead NHL play-by-play announcer.

From 1998 to 2001 he further was the English-language television voice of the Montreal Canadiens' regional broadcasts on TSN.

In spring 2001, Romanuk quit his job at TSN after fourteen years at the network, accepting an offer of hosting a morning drive show on The Team 1050, newly re-branded AM station in Toronto.

After the Team 1050 job went away, Romanuk started freelancing again, doing hosting work for Leafs TV among other gigs. In 2004, Romanuk got hired by the Fan 590 station and completed only 2004-2005 season.

Romanuk also freelanced on the Canadian networks CBC, CTV, TSN, and Sportsnet coverage of various international sporting events such as play-by-play announcing of triathlon and weightlifting at the 2012 Summer Olympics in London.

He further did voice-over work for the International Ice Hockey Federation, did play-by-play commentary for the Champions Hockey League in 2008-09, and emceed the 2012 Hockey Forum in Barcelona and the draw of the re-launched CHL in 2014 in Minsk. Further, he is also a famous child handbook writer on books about Hockey.

Romanuk is not only the best NHL reporter and play-by-play announcer, but he is also a loving husband to his wife Kari Romanuk.  So far, we only know that the sportscaster and his current wife bated before they tied the knot but we don't know when did they actually got married and how many children this happy couple has.

Paul Romanuk's Net worth and Salary

The Canadian sportscaster/anchor Paul Romanuk has an estimated net worth of $1.5 million dollars. As of 2018, the reporter receives an annual salary of $51,000 dollars from his successful reporting career with Sportsnet.

Paul Romanuk once in between his play by play announcement announced that the Defenceman Jakob Chychrun's father had died while he was still alive.

Paul Romanuk makes likely the biggest fuck up of his career. I don't know what it's going to take before he is unemployed by the Sportsnet company. This man is uneducated, an embarrassment to the Leafs, unprofessional, and owes one hell of a formal apology to the Chychrun family. What the topic even has to do with hockey I don't even know, but it was a sick twisted comment. Fuck off Paul, spam @Sportsnet with #Fireromanuk, and that is all.

It is considered to the biggest Hockey League announcement errors of all time. Despite he apologized for it later, his on-rink mistake is still memed and trolled all the time.