2× First-team All-Pro, Tyreek Hill is currently signed to the Kansas City Chiefs of the NFL as their No. 10 Wide Receiver. He was picked in the 2016 NFL draft by the Chiefs in round five. He played for three different colleges:  Garden City Community College, Oklahoma State University, and the University of West Alabama.

Born on March 1, 1994, Tyreek Hill was primarily a return specialist as a rookie, but subsequently transitioned to wide receiver. After his rookie season, he received the nickname Cheetah as a reference to his speed.

Currently Under $54 Million Contract, How Much Is His Net Worth?

4× Pro Bowl-winning Wide Receiver, Tyreek Hill inked three years, $54,000,000 extension contract with the Kansas City Chiefs in 2019, which ties him with Odell Beckham Jr. as the second-highest-paid receiver in football.

As of 2020, his net worth is approximately $5 million. Further, he owns a lavish mansion in Overland Park, Kansas.

Eli Manning and Peyton Manning are the highest-paid NFL rooster.

Shared A Son With His Ex-finacee Crystal Espinal

Tyreek Hill met Crystal Espinal while attending Oklahoma State University. The two started dating in 2014. During their time together, the couple shared a son, Zev Carter born, born in 2015.

Tyreek Hill with his ex-fiance and their son SOURCE: Lipstick Alley

While pregnant with their child, Crystal assaulted her then-boyfriend about cheating on her. They got into a brutal fight, and Hill ended up getting charged with domestic battery.

Nevertheless, the couple later patched up and got engaged in September 2018 after Espinal and Zev moved to Kansas City. His bae also flaunted her engagement ring on Instagram, captioning the video, “I said yes!” Reports shows, the family had been spending quality time together since getting reunited under the same household.

In March 2019, NFL star was investigated for alleged battery following an incident in which his three-year-old son sustained a broken arm. Soon, his son was placed into care temporarily in April by the Kansas Department of Children and Families.

After lack of evidence, the Johnson County District Attorney Steve Howe did not conclude the perpetrator. On 25th April, an audio recording of Hill and Espinal discussing the injury to their son and the subsequent investigation was released where the two discuss their son's broken arm.

Espinal: “He is terrified of you. And you say that he respects you, but it’s not respect.”

Espinal: “He is terrified of you.” 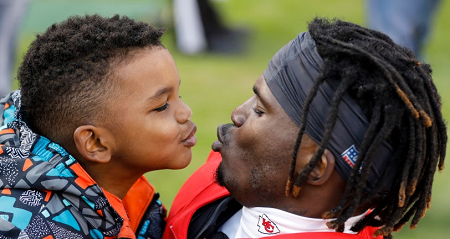 Further, the criminal investigation into Hill was resume; however, reports from medical examinations showed his son's arm was broken by accident. On July 9, 2019, the full audio from the recording was released, where Hill accuses Espinal of lying about the domestic violence accusations in 2014 and about Hill breaking their son's arm.

As there is no evidence, found that Hill being guilty, the NFL released a statement saying that Hill will not be suspended, but the incident will be re-examined if new evidence emerges.

Espinal Files For Custody, Child Support Of Their Twins

In June 2019, Tyreek Hill’s ex-partner, Crystal Espinal, gave birth to their twins. The following month, she filed a petition in Johnson County District Court for custody and child support of twins.

In court documents, Espinal mentioned that she and Hill “are not married, never have been married, and do not intend to be married.”

Fort Lauderdale, Florida native, Tyreek Hill was born to teenage parents: Derrick Shaw and Anesha Sanchez. He was raised by his mother as a single parent as well as by his maternal grandparents: Herman Hill, who was was a suspect in 15 criminal cases and grandmother also faced three criminal cases.