Eli Manning is an American professional football player who is currently playing as a  quarterback for the New York Giants of the National Football league, NFL. He is also the son of a former NFL quarterback Archie Manning and his younger brother Peyton Manning plays as a quarterback in Denver Broncos. He was initially drafted by San Diego Chargers in 2004 and later transferred to New York Giants.

The thirty-eight years old has a jaw-dropping net worth of $115 million with an annual salary of $11,500,000. Further, he is married and has three daughters.

Eli Manning's Net Worth and Endorsements; How much does he Earn as Salary?

Eli Manning is indeed a wealthy man, his devotion and hard work has been clearly reflected in his net worth. Manning has an estimated net worth of $115 million in 2019.

Apart from his earnings from his professional career, he too earns massive amounts through his several endorsement deals. He is one of the most marketable players off the field. His endorsement deals include Nike, Toyota Motor, DirecTV, and Gatorade. Manning's career earnings are the highest among active players with $206 million.

In 2017, he Scores a Hamptons Home for $8.5 million. The three-story home covers 7,000 square feet and has 5 bedrooms and 4 bathrooms. It's located just steps away from the Atlantic Ocean and includes private beach access and a pool and entertaining deck. In 2018, he sold his fabulous Hoboken condo for $3.55 million.

Personal Life of Eli Manning; Is he Married?

He is a married man. He tied the knot to his teenage sweetheart Abby McGrew whom he met at the University of Mississippi. The couple tied their knots in 2008, among their family and friends in a ceremony held in his hometown. 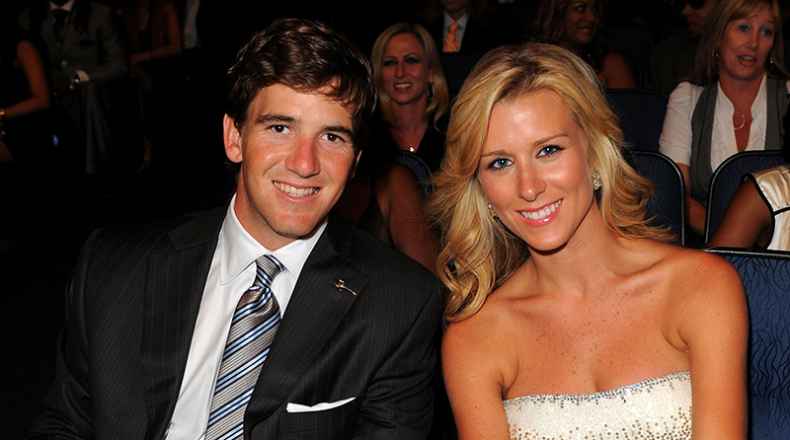 Well it's been over a decade of their marriage and the couple is living happily together and it seems clear that they are doing well in their relationship. There is no issue or rumors of divorce between the lovely couples. They both understand each other feeling and their relationship is depending on mutual trust and understanding.

He is a philanthropist and is also involved in several humanitarian projects along with his brother, he provides the reliefs to the victim of Hurricane Katrina and set a social institution of The Eli Manning Children’s Clinics.

Related Article: NFL's Fittest 37-year-old Player Eli Manning, How does he do that?

Eli Manning was born as Elisha Nelson Manning IV on 3 January  1981 to American parents Archie Manning and Olivia Williams Manning. He was born and raised in New Orleans, Lousiana, United States. Talking about his nationality, he is an American and belongs to White American ethnicity. He has completed his high schooling from New Orleans (LA) Newman and later after that, he attended the University of Mississippi.

Right after his graduation, he was drafted by the San Diego Chargers in 2004, but he later transferred to New York Giants. Making his debut in 2004, he impressed his coach and was named as the stater from the 2005 season.

He has also made his appearance in commercial and television shows. He has spent over ten years playing for the New York Giants and still plays for the team. Manning holds Giants franchise records for most passing yards, touchdown passes and completed passes in a career, and the NFL record for most fourth-quarter touchdown passes in a season.