Maria Taylor Hyatt, popular as Maria Taylor is an analyst and host for the ESPN and SEC Network. She covers college football, volleyball, and college men and women’s basketball.

Well, Maria has an estimated net worth of over $2 million. As a College Football Analyst at ESPN Maria's 2018's contract reportedly entitles her an average salary of $87,885. Regarding her relationship status, she is married.

As of 2019, Maria Taylor has an estimated net worth of over $2 million. Moreover, she is working for a reputed network, so she is expected to be earning a good amount of salary from ESPN. She receives an average salary of $87,885 before she renewed her contract with ESPN in late August of 2018.

Her income is further added to several other Cabel sports channel appearances and several college women's sports coverage too.

In December 2018, Maria Taylor's five years deal with ESPN, by the beginning of 2019 will yield her somewhere around $100 thousand for her on-field play by play reporter per year.

With a tremendous net worth and salary, she is living a lavish lifestyle.

Work with co-founders @Fantasi_Co and @MariaTaylor and get hands-on experience!

Maria Taylor is a married woman as she tied the knot with her long-time boyfriend, Rodney Blackstock. The duo met while watching the Charlotte Hornets in North Carolina, on September 2014. The couple connected in the back room of that same Hornets game.

According to Taylor, Blackstock approached her first and they exchanged numbers. 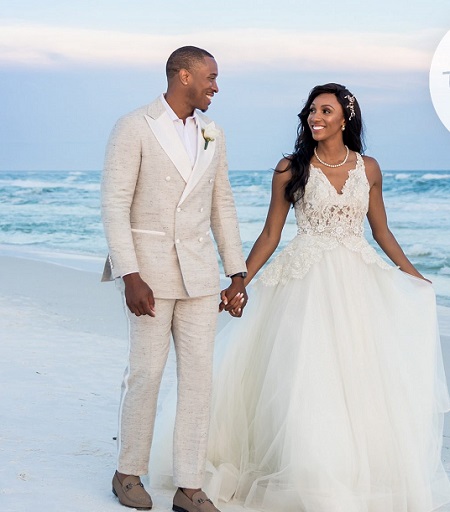 Taylor believes it was love at first sight. “I’ve never had that feeling before, ever, where you just look at someone and you’re like, ‘That’s the one.’”

Eight months later, Blackstock proposed her and they planned on getting married that June in 2016. However, both parties felt there were rushing into marriage a little too soon. Hence, they decided to wait for some time. A second proposal took place during a hike in L.A. later three years where Blackstock proposed her with a floral-inspired ring featuring a halo. 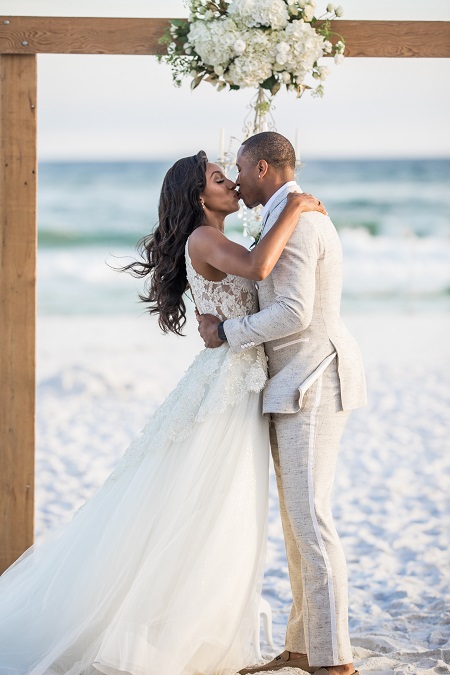 The couple exchanged vows at the oceanfront Hilton Sandestin in Destin, Florida, on 5th May 2019. At the wedding, the bride wore a gown by Eve of Milady from Bridals by Lori in Atlanta, Georgia. The pair went with a beach theme comprised of all an all-white color scheme.

Now that she’s married, she stated there has been one big shift in the relationship. “You always knew there was love, but marriage adds this layer of security. We’re going through our life together, forever,”.

Besides, there is no information about her past affairs or boyfriend.

In September 2018, Maria interviewed Alabama's coach Nick Saban putting forward a controversial question, “Everyone had questions about who was going to start at QB when this game started, what answers did you have about your QBs after watching both of them play tonight?”

Saban instead replied violently and said:

Taylor was born on May 12, 1987,  in Alpharetta, Georgia, United States. Her star sign is Taurus. Talking about her nationality, she is an American and belongs to Afro-American ethnicity.  She is the daughter of Steve Taylor, a former FBI agent, and Suzette Taylor.

Maria Taylor went to Centennial High School and showed a deep interest in sports from her childhood days. She was the recipient of the Atlanta Tip-Off Team of the Year and also was a member of the 2004 USA Volleyball Junior National A2 team.

Upon graduation, she got an athletic scholarship from the University of Georgia, where she played basketball and volleyball from 2005 to 2009. While Maria was a university student, she had already made her appearance on several studio shows like Dawg Report, SEC Men’s Basketball Tonight, and SportsNite.

Maria Taylor is successfully working as an analyst and host for ESPN and SEC Network. She signed up as a reporter with the SEC Network in its third game season. She works as a college football reporter along with Brent Musburger and Jesse Palmer for ESPN and she even worked as a sports analyst for college-level women’s volleyball and basketball game.

Finally, in 2013, Maria Taylor worked as a sideline correspondent on ESPN 2 as a sports analyst. She also became a part of ESPN's NBA draft coverage and is a guest host on Get Up! which is hosted by Jalen Rose.

Taylor was named as the reporter for College GameDay replacing Samantha Ponder and ABC Saturday Night Football in 2017. She is one of the most reputed hosts for ESPN and works alongside reputed reporters such as Laura Rutledge, Kaylee Hartung and Cary Champion.

After her contract expired on August of 2018, ESPN and Maria came to an agreement for the second time and penned a Five years contract together.

As per the report from The Athletic’s Richard Deitsch, Taylor and Rachel Nichols will split the hosting role of ESPN’s NBA Countdown in some manner this year

If you follow Maria Taylor on Twitter, then you probably are aware that she is not only a College sports analyst and announcer but a genuine college sports promoter, she is seen giving things away on charity just to promote college games.

Take a look at her Giveaway announcement for College football promotion:

Listen up #collegefootball fans! Nominate a friend that’s the biggest college fan for a chance for both of you to win QLED TV. Tell us why they deserve it and we’ll upgrade both of you! Use #SuperBigFan and #contest in to enter. T&C: https://t.co/D4FvsK8J0V pic.twitter.com/2CRzjZ7inT 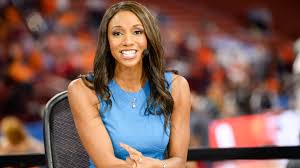 Her Instagram post for her 2018's last appearance for the famous morning show "Get Up" received over 2400 likes just because the sportscaster chose to wear a green Top-followed with leggings and skirt.

Further, the long-legged reporter was one of the most searched sportscasters on the very same day on 21st December-2018.

Maria Taylor is a sexy African-American sports journalist for ESPN, she is an on-field play by play reporter for many college games broadcasted on ESPN. Maria isn't just talented but is a very attractive TV personality.

Maria is 6 feet and 2 inches tall in height, which is around 1.88m. Maria also has a good number of followers on her Twitter and Instagram accounts. She uses her accounts like twitter to let her fans know about the games, result and her personal life event behind the camera.