Some people come to the spotlight after their hard work pays off, and some through their relationship status with a reputed personality. Kelly Stafford followed a similar path to her rise to fame. Kelly is a model and better-known as the wife of the famous American football quarterback for the Los Angeles Rams of the National Football League, Matthew Stafford.

Kelly Stafford was born Kelly Hall on May 29, 1989, in the States. She has not shared much about her parents and her early life. After graduating from High School, Kelly enrolled at the University of Georgia.

Kelly and Matthew exchanged their wedding vows on April 4, 2015, at a lavish wedding ceremony in their hometown. They had been seeing each other for several years before their wedding. The duo first met while attending the Univesity of Georgia in 2008. 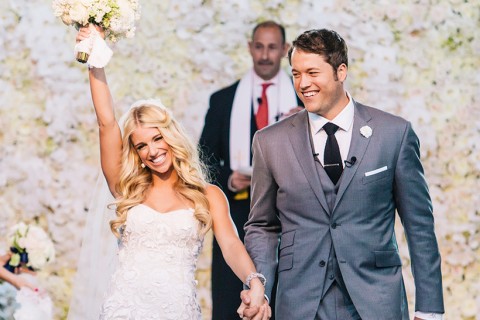 Kelly was a cheerleader for the university's football team. Their friendship turned into a relationship shortly. They got engaged in March 2014 and shared their engagement through social media posts.

Kelly and Matthew welcomed their first child, a twin Chandler and Sawyer, in March 2017. Both of them spent most of their free time with their children. The family of four extended to five with the birth of a third daughter Hunter Hope in August 2019. 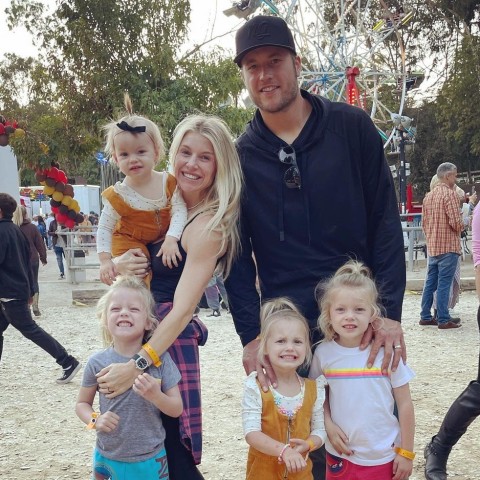 Kelly shares a photo with her husband and their children SOURCE: [email protected]

In early 2020, Matthew shared about expecting their fourth child shortly. In June 2020, The duo welcomed their youngest daughter, Tyler Hall. Both of them are very much happy with their family. They keep sharing their children's photos on their timelines regularly.

Kelly was diagnosed with a brain tumor in April 2019. She shared the news through her social media account. On April 21, Stafford underwent surgery and removed the tumor. Matthew had stopped going to training camp to look after his family.

The player wag lives a happy and lavish lifestyle through her short career and her husband's successful career. Kelly has an estimated net worth of more than $100,000. She has earned most of her net worth through her modeling and podcast career. Stafford hosts a podcast called The Morning After with Kelly Stafford.

Matthew Stafford has an estimated net worth of more than $100 Million. He credits most of his net worth to his salary and contract in the NFL. In his thirteen seasons in the NFL, Matthew spent his twelve seasons with the Detroit Lions and recently moved to Los Angeles Rams in 2021. Stafford is third in all-time passing yards per game and was the fastest NFL player to reach 40,000 yards.

Houses and Mansion of Matthew Stafford

Matthew listed his lavish mansion at Bloomfield Hills, Michigan, for $6.2 Million in 2020. The following year, He bought $19.6 million for an under-construction mansion in the Hidden Hills area. Stafford is very early in his career and will be adding more than $100 Million in the future.

In April 2008, Kelly signed a six-year $41.7 million contract in guaranteed money and carried a total value of up to $78 million. After the contract expired in 2013, He agreed to a three-year, $53 million extension with the Lions. He was guaranteed $41.5 million through 2017.

Kelly started playing football in High School and enrolled at the University of Georgia. He became the first true freshman quarterback to start for the Georgia Bulldogs football. Stafford was named SEC Freshman of the Week twice during the 2006 season. At the end of his junior year, Kelly was named to the 2009 Capital One Bowl.

Kelly listed his name for the 2009 NFL draft. Detroit Lions drafted him as the first-round pick in the draft. Stafford broke out in 2011 when he became the fourth NFL quarterback to throw for over 5,000 yards in a single season. He led Detroit to two further postseason runs in 2014 and 2016, earning Pro Bowl honors.

Kelly became a Super Bowl LVI champion in 2021, winning the title against  Cincinnati Bengals. He spent his career with the Lions until 2021 and was traded to the Rams in a package involving Jared Goff. The player has several NFL records including Most fourth-quarter comebacks in a season and Most passing attempts in a season.