Jalen Anthony Rose, a.k.a. Jalen Rose is an American retired basketball player, current sports analyst for ESPN as well as the co-founder of the Jalen Rose Leadership Academy. He finished his collegiate career at Michigan, where he was a member of the Wolverines' "Fab Five" alongside Chris Webber, Juwan Howard, Jimmy King, and Ray Jackson. Further, he was picked by Nuggets in the 1994 draft in the round one and later played for Indiana Pacers (1996-2002), Chicago Bulls (2002-2004), Toronto Raptors (2004-2006). New York Knicks (2006), and Phoenix Suns (2006-2007).

Detroit, the Michigan native, Jalen Rose, was born on 30th January 1973, under the star sign Aquarius. The forty-seven years old is an American who is of Afro-American ethnic background. Regarding his physique, he stands 6 ft 8 in (2.03 m) and weighs 210 lb (95 kg).

Rose's success on the basketball court, and then his work at ESPN, has helped him earn a tremendous fortune. As of 2020, his net worth is estimated at $60 million. Throughout his 13-year NBA career, he earned more than $100 million in salary compensation.

After retirement as a NBA player, Jalen Rose pursued a career as a sports analyst. He has a successful career at ESPN as an NBA Countdown Analyst and currently stands as the co-host of Jalen & Jacoby with David Jacoby. According to reports, Rose's salary is reportedly around $3 million per annum, making him among ESPN's highest-paid employees.

Besides, his other source of income is business. Proudly, he owns a Three Tier Entertainment, an independent, Los Angeles based management and production company, which develops television and film projects as well as also manages talent, including directors, actors, and screenplay writers.

He owns a house in Orchard Lake, Michigan (MI), US.

Jalen Rose and Molly Qerim tied the knot on 20th July 2018 in a small ceremony in New York City and took off to Turk's and Caicos for their honeymoon. Shortly after the news of their low-key wedding came to light, the duo shared some pictures of their marriages. 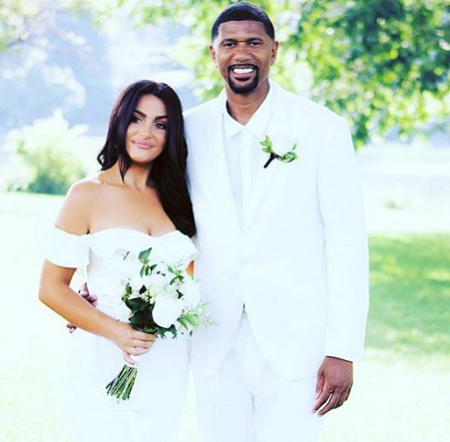 The ESPN stars confirmed their off-camera connection in a mid-2016 tweet that featured the pair looking cozy with the caption, "I'd hate me too." While dating, Qerim opened up about how the couple managed to balance a professional and personal relationship with one another. Really, the duo has got each other's back, and they are doing great in their married life.

Regarding children, they have not planned yet.

Jalen was born to Jeanne and Jimmy Walker, who was a No. 1 overall draft pick in the NBA who started in the backcourt alongside Jerry West in the 1972 NBA All-Star Game. Though the father and son spoke several times over the phone, they never met in person. In July 2007, Walker died of lung cancer.

Rose's name is a combination of his father's name, James, and his uncle's name, Leonard, which was named by his mom. Rose's prominence in the NCAA and NBA helped to earn him a big name and was popular names for African-American boys born in the 1990s and early 2000s. Several notable American athletes who began play in the 2010s are named Jalen, after Rose.

After Retirement As Player

In 2007, Jalen Rose worked at ABC/ESPN, first as an analyst on SportsCenter. In 2013, he joined NBA Countdown as one of the hosts. Also, he worked on ESPN's Grantland.

Currently, he co-hosts a national US sports radio show, Jalen & Jacoby, show on ESPN Radio. Since April 2018, he started co-hosting a three-hour morning sports talk show on ESPN, Get Up!, along with Michelle Beadle and Mike Greenberg.