Dewayne Dedmon is an American professional basketball player who plays in the National Basketball Association (NBA). As of 2018, Dedmon plays for the Atlanta Hawks as their Center. He previously played for other teams including Golden State Warriors, Philadelphia 76ersOrlando Magic, and San Antonio Spurs.

Dedmon is married to his girlfriend Kyla Harris and has a son with her. As of 2018, his annual salary is reported to be about $6.3 million and has an estimated net worth of $7 million.

Dewayne Dedmon was born on 12th August 1989, Lancaster, California, United States. His parents are father Thomas Dedmon and mother Gail Lewis. He grew up along with his sibling sisters Sabrina Dedmon and Marina Dedmon.

As a freshman at college Dewayne Dedmon averaged 6.6 points and 7.8 rebounds per game. However, Dedmon missed last seven regular 2009-2010 season games due to a broken bone in his forehead and an injured nasal cavity. However, during his sophomore year at University Dedmon averaged average 7.6 points and 5.5 rebounds in 20 games.

Moreover, in his junior years, Dedmon played 31 games he averaged 6.7 points with 7.0 rebounds. Dedman remained undrafted in the 2013 NBA draft so he joined Miami Heat for the Orlando Summer League. Similarly, he further joined the Dallas Mavericks for the Las Vegas Summer League.

Dedmon was repeatedly signed and waived by Golden State Warriors on until he signed a 10-day contract with Philadelphia 76ers on 14th January 2014. In his debut match, Dedmon recorded 7 rebounds and 2 blocks. Similarly, Demon also played for Orlando Magic and San Antonio Spurs.

On 21st July 2017, Dedmon signed a two-year contract for Atlanta Hawks. He scored his career-high 20 points and had 14 rebounds in a match against the Sacramento Kings.

Dewayne Dedmon is a married man. Dedmon is married to his long-term girlfriend Kyla Harris. The couple began dating while they were university students. His spouse Kyla was an NFL cheerleader for the Jacksonville Jaguars from 2012-2014. 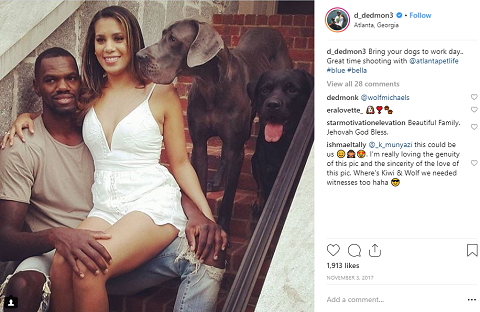 As the couple is already married, they haven't yet mentioned the actual date of their wedding. The husband and wife are blessed with a child from their relationship. They have a son named Dewayne Jamal Dedmon II born in November 2018. 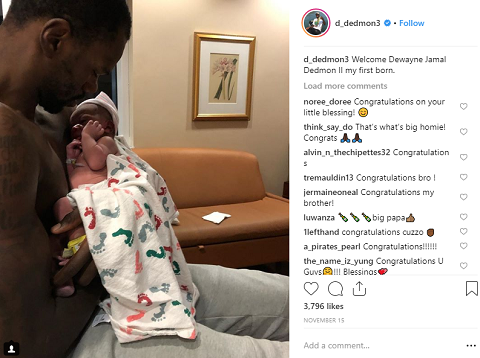 For long, Dedmon and his wife are maintaining a peaceful relationship without facing any rumors of divorce and extramarital affairs. Other than this, Dedmon hasn't dated any other girls in past. Moreover, there are no any rumors of his other affairs too.

Dewayne Dedmon earns a fortunate amount of money from his professional basketball career. As of 2018, the net worth of Dedmon is estimated to be around $7 million. Dedmon previously played for teams including Golden State Warriors, Philadelphia 76ersOrlando Magic, and San Antonio Spurs.

Dedmon has made the career earnings of $18,359,762 from NBA. Previously, he had a 3-year contract with San Antonio Spurs worth about $2 million. 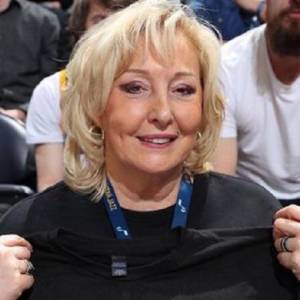