Jaylen Adams is an American professional basketball player who plays in the National Basketball Association (NBA). As of 2019, Jaylen Adams currently plays for the Atlanta Hawks as their Point Guard, on a two-way contract with the Erie BayHawks of the NBA G League.

As a Point Guard, Jaylen Adams reportedly earns around $77,250 dollars as his yearly salary from Atlanta Hawks. His net worth is yet to be determined.

As Jaylen Adams just started his professional basketball career, it is hard to find out the exact figure of his net worth. But looking at his contract and playing career, his net worth is estimated no less than the six digit figure.

Adams reportedly signed a two-way contract with Atlanta Hawks in 2018. Further, the NBA player has an average salary of $77,250 dollars annually. Kept aside Jaylen Adams financial earnings, his personal assets include a car.

Other than being a famous NBA Point Guard, Jaylen Adams is pretty famous in social media. He has  6.9k Instagram followers and 4.2k Twitter followers.

Jaylen Adams has barely mentioned his dating affairs and relationships. There is almost no information regarding whom he's currently dating. There are no mentions of any girlfriend in his social media pages. He is supposedly single at the current time.

However, his post from 2016, makes his relationship status little excitement. It seems that the pair are dating but without any concrete proof its hard to speculate his love life.

Jaylen Adams is in the starting phase of his career in the NBA. So. he seems to be totally focused on developing his career. He is away from any kind of dating or relationships.

Jaylen Adams was born on May 4, 1996, in Hanover, Maryland to parents, Darryl Adams and Yalonda Adams. As per his nationality, he is American. Further, his star sign is Taurus.

Adams had a great career in college basketball. While playing for St. Bonaventure University, he averaged 17.9 points, 5 assists, and 3.7 rebounds. He was named to the first Team all-Atlantic 10 for second straight years.  He further scored 40 and 44 points respectively in games against Duquesne and St. Louis. However, his career in the NBA didn't start until 2018.

In 2018, Adams signed a two-way contract with the Atlanta Hawks after he was undrafted in the 2018 NBA draft. As per the deal, he will split time between the Hawks and their NBA G League affiliate, the Erie BayHawks. In his NBA debut against the New York Knicks, he recorded 1 rebound and 1 assist. 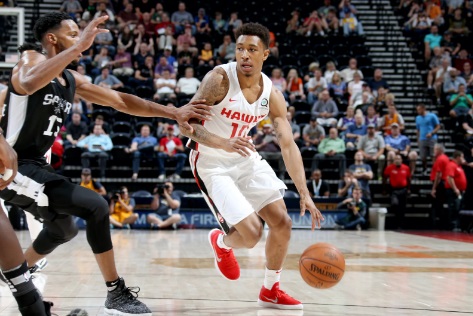 He further recorded a score of  23 points in his G League debut in a win over the Grand Rapids Drive. His current team also includes his Atlanta Hawks' teammate Daniel Hamilton.

Facts and stats of Jaylen Adams

Jaylen Adams is not only a world-class athlete but also has a very attractive individual. The Famous NBA star is 6 feet 2 inches in height and weighs around 86 kg.