Frank Jackson is an American professional basketball player who plays in the National Basketball Association (NBA). As of 2019, Franklin Willis Jackson currently plays for the New Orleans Pelicans as their Point Guard.

As a Point Guard, Franklin Willis Jackson reportedly earns around $1,378,242 dollars as his yearly salary from New Orleans Pelicans. Since he has just started his career in the NBA, his net worth is yet to be reviewed.

Frank Jackson's Salary and Net Worth in 2019

Jackson has just played a season so, his net worth is yet to be estimated since he is yet to earn significant money from his career.

Franklin Willis Jackson so far has made earnings of about $2 million dollars from his entire NBA career. Further, he reportedly owns a car.

Other than being a famous NBA Point Guard, Franklin Willis Jackson is pretty famous in social media. He has 68.9k Instagram followers and 23k Twitter followers.

Jackson hasn't revealed much about his personal life on his social media pages. There are posts of photos of him with his prom date and best friend but hasn't mentioned about dating affairs anywhere. There is barely any information regarding who he might be currently dating.

After going through his social media pages, it seems that he is currently single and is focused on his career in the NBA. He has posted several photos of him playing the game.

Franklin Willis Jackson is not only a world-class athlete but also has a very attractive individual. The Famous NBA star is 6 feet 4 inches in height and weighs around 91 kg.

Franklin Willis Jackson was born on May 4, 1998, in Washington, D.C. to parents, Alvin B. Jackson, Jr. and Juleen Jackson. As per his nationality, he is American and belongs to the Afro-American ethnic group. Further, his star sign is Taurus.

In June 2017, Jackson was drafted 31st overall by the Charlotte Hornets. But after he had undergone foot surgery and for cash considerations, he was traded to the North Orleans Pelicans. He again underwent another foot surgery and missed his entire rookie season. 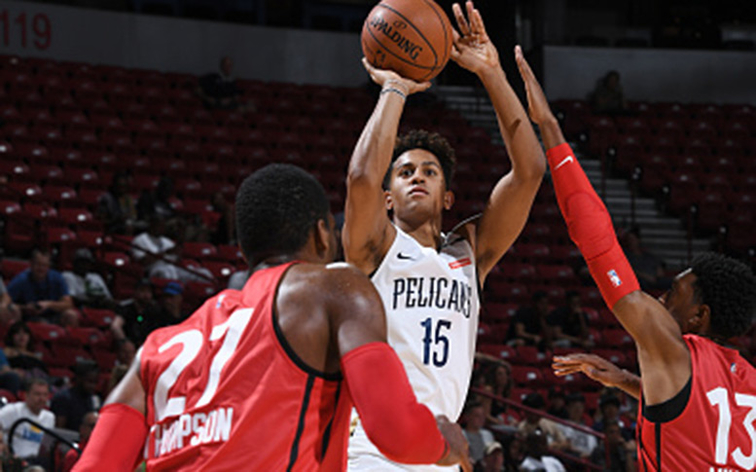 But unluckily, Jackson suffered a left ankle sprain and was ruled out for the rest of the tournament. He made his NBA debut against the Houston Rockets and won the game. He plays along with other players like Anthony Davis, Wesley Johnson, Elfrid Payton, etc.