Cortney Casey is an American Mixed Martial Art (MMA) fighter who is currently signed to the Ultimate Fighting Championship (UFC) under the Strawweight division. Earlier, she competed at Pacific Xtreme Combat and XFC.

Mesa, Arizona native, Cortney Casey was born on 5th May 1987, under the star sign Taurus. The thirty-three years old holds an American nationality and is of white ethnic background. For now, she is expected to face Gillian Robertson at UFC Fight Night: Blaydes vs Volkov on 20th June 2020.

How Much Is Cortney Casey's Net Worth? Know Her UFC Career Earning

A professional since 2012, Casey has amassed 9-7-0 (win-loss-draw) throughout her MMA career. The main source of her revenue is her MMA career. As of 2020, her net worth is approximately $1 million.

Her UFC career earning is disclosed below:

Besides fighting events, sponsorship and endorsement deals play a vital role in making money. Also, she has her own nutrition product brand.

Cortney Casey is in a relationship with fellow UFC athletes, Drakkar Klose. Though she is yet to come out with her love story with Klose, however, they are believed to meet in UFC. Further, they are suspected to have started saying since early 2019. Their official has a lot more to offer to their fans. 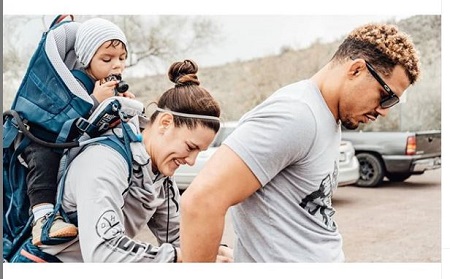 Cortney enjoying an outing with her boyfriend and step-son SOURCE: Instagram @castironcasey

Not only girlfriend to Drakkar Klose, but she is also a stepmom three-year-old baby boy. A matter of fact, Brakkar was previously in a relationship with a lady with who he welcomed a son on 26th July 2018. Interestingly, he has not deleted any of his ex pictures from his official Instagram.

Of Mexican descent, Cortney is a former Division I soccer player at the University of Texas at El Paso. She started MMA training in 2009 following her soccer career was cut short due to an injury. In 2012, she started her amateur career and her professional career a year later.