Mike Scott is an American professional basketball player who plays in the National Basketball Association (NBA). As of 2018, James Michael Scott currently plays for the Philadelphia 76ers as their Power forward.

Playing as a Power forward, Scott reportedly earns around $4,320,500 as his yearly salary from the Philadelphia 76ers and has a net worth of $10 million.

Mike Scott Salary and Net Worth

James Michael Scott is not only a world-class athlete but also has a very attractive individual. The Famous NBA star Scott is 6 feet 8 inch in height and weighs around 108 kg. Mike has a good relationship with his family and his family always supports in his game.

Mike was arrested for drug charges along with his brother while driving an SUV carrying 35.2 grams of marijuana and 10.9 grams of MDMA on July 30, 2015. Later on, the charge was suppressed by Georgia Superior court against Mike and his brother suggesting a pattern of racial profiling by law enforcement.

Currently, details about his probable girlfriend/wife are not available. Besides, he is quite popular in social media.

Even mikes tattoos show his active involvement in social media, as he has emoji tatted all over his upper body. Some of the common emoji signs like laughing emoji, evil emoji can be seen on his shoulders and neck.

James Michael Scott was born on July 16, 1988, in Chesapeake, Virginia to parents Michael Scott and Lisa Mackall. James is American by Nationality and belongs to the Afro-American ethnic group. His star sign is cancer.

Scott spends his childhood with his brother Anton Scott. James attended Deep Creek in Chesapeake, Virginia and Hargrave Military Academy, Chatham, Virginia where he played for his high school basketball team. Scott, in his high school career, was listed as the No. 115 player in the nation.

After completing high school, he enrolled at the University of Virginia, averaging 15.9 points and 10.2 rebounds in the team's first ten games. Later he suffered from the ankle injury.

Mike was one of the top players in Atlantic Coast Conference averaging 18.0 points and 8.3 rebounds per game. Scott ended his Virginia career with 1,538 points 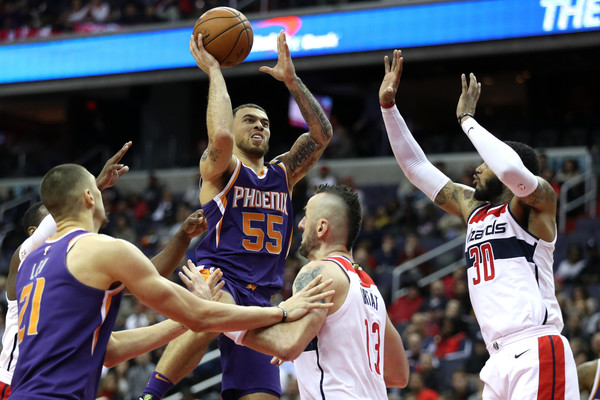 On February 6, 2019, he was traded to the Philadelphia 76ers along with Tobias Harris and Boban Marjanovic.