Mike Alvarado was born on July 28, 1980, in Denver, Colorado. He is the only child born to his biological parents, Ron Cisneros, and his former wife. Mike's parents separated when he was very young, and his father raised him on his own. His father was also an aspiring boxer, and his cousin Ricky Lopez fought in the Super Bantamweight division.

What is Mike Alvarado's Net Worth? Know About His Earnings and Contracts

Mike Alvarado has an estimated net worth of more than $2 Million. He credits most of his net worth to his successful career in boxing. Mike has several sponsors like Avianne & Co. Jewelers, Bail Hotline Bail Bonds. He has been earning millions from his sponsors, advertisement deals, contracts, and several other deals. 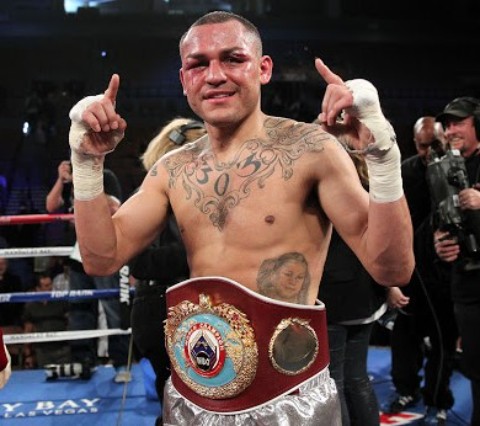 In 2013, Alvarado took home $650,000 from his match against Brandon Rios. His opponent, Rios, earned $1.5 Million from the fight. Shortly after the match, they had a rematch, and both of them made the same amount. He had lost the first match but won the rematch. In 2014, Mike took home $650,000 from his fight against Juan Manuel Marquez. His opponent, Juan, earned $1.4 Million from the match.

Mike Alvarado Married Life; Who is his Wife?

Mike is a married man living a happy married life. Mike tied his wedding knot with his longtime girlfriend on July 11, 2015. They love birds have a private wedding ceremony where they invited only a few members from both the families and some close friends. Mike opened about his marriage in 2016 in an interview.

Alvarado is the proud father of four kids. The pair had three daughters before their marriage. He has become successful in keeping his personal life away from the media. There is not a single word about his wife and their children with the public. Soon after the wedding, Mike and his wife welcomed a son to their family.

The American professional boxer was a two-time Colorado Class 4A state high school wrestling champion. His father, Ros, is his biggest inspiration. He made his professional debut in 2004 gainst Istafa Jihad and won the first round via KO. Alvarado won his first title in 2011 against Ray Narh of vacant WBC Continental Americas light welterweight title.

In July 2011, Mike won his second title of IBF Latino light welterweight title. He retained his title against Breidis Prescott. In October 2012, Alvarado lost his first professional fight against Brandon Rios. He then lost three matches in a row and lost all his titles. He took a gap year in 2015 and returned in 2016 with a win over Saul Corral. Mike played his last game in 2019 against Arnold Barboza Jr.