Maxim Vlasov was born on September 11, 1986, in Kuybyshev, Russian SFSR. He is yet to share information about his early life and his parents with the public. Maxim goes by the nickname "The Kill." He has an Orthodox stance of fighting. Talking about his physical appearance, Maxim stands six feet and three inches tall and weighs 79 kgs.

Maxim started training in boxing in his early teens. There is not much information about his amateur career. Vlasov made his professional debut at the age of nineteen in 2005. He faced Kirill Galuzin in his very first match and won it with a unanimous decision. Until 2010, Maxim won fights in a row. He got his first title matchup against Mikhail Krinitsin for the vacant WBC-ABCO super middleweight title.

The Russian boxer has been active for more than fifteen years. He must have earned millions from his career but has not shared any details. Maxim likes to keep his personal life away from the media.

Vlasov will fight Joe for the vacant WBO title in his upcoming matchup through which he will earn a reported sum of the 6-digit figures. His net worth is estimated to be more than $1 Million.

Who is Maxim Vlasov Married to? Know About His Married Life

Maxim is a married man living a happy married life along with his wife and their son. Maxim tied his wedding knot with Marina Vlasov and have been married for more than ten years. They had a private wedding ceremony where only a few members from both the families and some close friends attended. 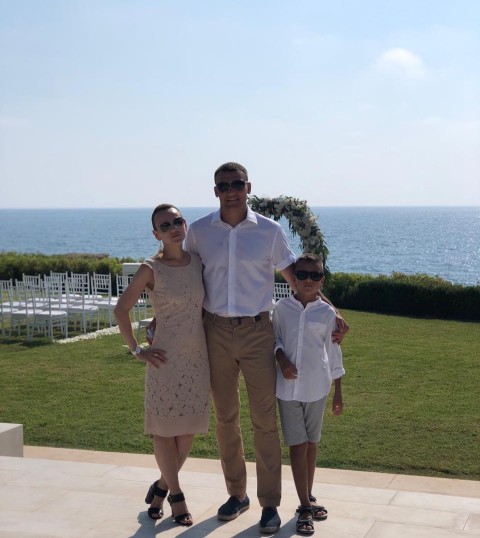 Maxim with his wife and their son SOURCE: [email protected]_vlasov_official

Maxim and Marina welcomed their child, a son, soon after their wedding. Vlasov is an active social media user and keeps posting photos of his family and his games. The family of three is living a happy life and can be seen going on vacation regularly.