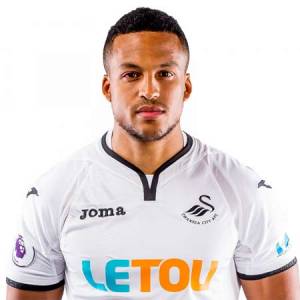 Apart from playing for Swansea City, he has played for English Clubs such as Blackburn Rovers and Norwich City.

He has represented Sweden in their youth teams and has been playing for Sweden national senior team since 2010.

Martin Olsson was born to a Kenya mother, Maggie Olsson, and a Swedish father on 17 May 1988 on Gavle, Sweden.

He also has a twin brother, Marcus Olsson, who like him plays as a left back for Derby County and sister, Jessica Olsson is married to NBA player, Dirk Nowitzki who plays for Dallas Mavericks.

Hence, his net worth could be estimated at above $ 4 million. He gets his income and money mostly from playing football clubs across the world and from his national side of Sweden.

With his vast wealth, he loves to spend a comfortable life and vacations at the most exciting places.

After promoting from youth academy of Blackburn Rovers, he joined the senior team in 2007 and made his debut for the club during UEFA Qualifiers in 2007/08.

Martin made his Premier League debut against Derby County on 30 December 2007.

He later signed a four contract with the club in may of 2008 and his first goal for the club against Everton on September 24, 2008.

After spending several seasons with Blackburn Rovers, he signed a four-year contract with Premier League team, Norwich City during July 2013 and scored his first goal against Bury FC on  27 August 2013.

He helped Norwich City to reach the playoff of English Football League Championships in 2014/15.

Martin Olsson is currently playing English Premier Club, Swansea City who signed him on mid-January 2017 for a transfer fee of around $ 5.54 million from Norwich City.

He scored his debut goal for Swansea city against Leicester City on 12 February 2017.

After representing Sweden U-19 and U-21 teams, he made his debut for senior Sweden national team in 2010. He has played 41 matches scoring five goals for the Sweden team.

Martin Olsson played alongside players such as  Seb Larsson and Mikael Lustig in the Sweden side captained by Zlatan Ibrahimovic in UEFA Euro 2012 and 2016.

Martin Olsson is possibly single and unmarried as the Swedish defender has not revealed any information about his personal and private life to media and social sites like Facebook and Instagram.

It seems he is more focused on his career than be involved in sort of relationship and commitment other than football.