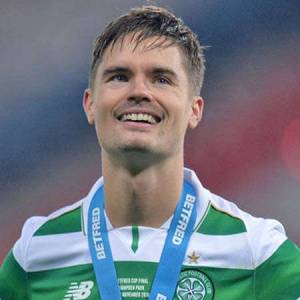 Mikael Lustig is a professional football player currently playing as right back and occasionally as a center back for Sweden national football team and for Scottish Premiership side, Celtic FC.

Apart from playing for several European football clubs, he has represented Sweden in their youth levels and made his full senior debut with Sweden national team in 2008.

Mikael Lusting holds a Swedish nationality having a European ethnic background was born on 13 December 1986 to Swedish father, Mats Lustig on Umea, Sweden.

Mikael Lustig’s Net worth and Salary

As his exact figure of net worth is not known, his net worth along with his assets, earnings and endorsing several sports products; his total sum could be assumed in the region of $ 3 million.

With his accumulated wealth and loving family, he seems to enjoy life and spending vacations with his family. He even owns several cars. His car with Christmas presents was stolen back in 2017.

After playing for a couple of seasons for Sandakerns, he joined his hometown football club,  Umea FC for two years. He then signed with GIF Sundsvall and made his debut in the Allsvenskan league in 2005 after which he was transferred to Norwegian based club, Rosenborg BK in the summer of 2008.

With the Scandinavian side, he was a part of the team that went on to win Norwegian Premier League in 2009 and 2010.

His impressive performances at the Norwegian club caught the eye of renowned Scottish football club, Celtic FC whom they signed the Swedish midfielder on November 23, 2011, and made his debut for the Celtic side against Aberdeen on March 3, 2012.

He scored his first goal for the club against Hibernian on September 1, 2012. During early February 2017, he scored a hattrick against St Johnstone. The goal he scored through a rabona way was shortlisted and nominated for FIFA ‘s famous Puskas award, named after legendary Hungarian striker Ferenc Puskas.

Mikael was highly successful as he with team won a multitude of trophy and titles like Scottish Premiership, Scottish Cup, and Scottish League Cup.

He made his senior debut for Sweden against the USA in a friendly match in January 2008 and scored his international goal against Moldova during UEFA Euro 2012 Qualifier on 29 March 2011.

Mikael Lustig along with Swedish players such as  Seb Larsson and Martin Olsson was the part of the Swedish team led by Zlatan Ibrahimovic that played in UEFA Euro 2012 and 2016.

Mikael Lustig is happily married to his wife, Josefin Johnsson with whom he married in 2013. The wedding ceremony was conducted in his home in Sweden.

The couple is blessed with two daughters, Lexie and Lucia Lustig. They already had a daughter before their marriage who was also a special guest on their wedding. the 2-year-old daughter was a flower girl.

Josefin runs a fashion label and her online videos have been a smash hit in their native Sweden. She also writes her own blog.

He is the most beloved player in Celtic FC and has got a large number of fan following in Scotland and even sang a song in honor of  Mikael Lustig.