Mark Turgeon is a well-known American college basketball coach. He has been working as the head coach in college basketball since 1998 and worked as an assistant coach since 1987. Turgeon is currently working as the head coach of the University of Maryland, College Park, since 2011. He started his career as a player for Kansas Jayhawks Men's Basketball team.

Mark Turgeon was born on February 5, 1965, in Topeka, Kansas. He is among the five children born to his parents. Mark is yet to share information about his parents with the public.  After graduating from Hayden High School, He enrolled at The University of Kansas and graduated with a bachelor's degree in personal administration. Mark stands five feet and ten inches tall and weighs over 90 kgs.

What is Mark Turgeon's Net Worth? Know About His Earnings, Salary, and Income

Mark Turgeon has an estimated net worth of more than $10 Million. Mark has an annual salary of $2.7 Million as of 2021. He is ranked among the highest-paid college basketball along with Jay Wright and Greg McDermott. Last season, Turgeon took home more than $3 Million when he received some bonus amount after winning the Big Ten regular season.

In 2016, Mark extended his contract for four-year, where Turgeon will earn $2.55 million annually in the base and supplemental salaries, subject to 5 percent annual raises, with a chance to make an additional $425,000 each year through an assortment of incentives. This contract includes several other bonus amounts, which range from $10,000 to $200,000. Before extending his contract with Maryland, The head coach made approximately $870,00 as his annual salary.

Father of Three Children; Who is Turgeon's Wife?

Yes, You read that right. Mark is the proud father of three children. Mark tied his wedding knot with his longtime girlfriend, Ann Fowler. The love birds got married in the early 1990s. They had a private wedding ceremony where only a few close friends and some family members from both sides attended the event. 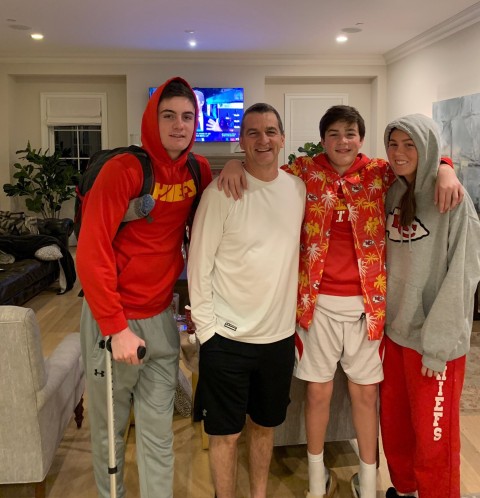 Soon after the wedding, Mark and Ann welcomed three children, two sons, Leo Turgeon and William Harris Turgeon, and a daughter, Ella Turgeon. His son, Leo, studies at the University of Kansas and plays basketball.

Mark started his basketball career as a player and played his university team. However, soon after graduating, He started working as the assistant coach of Kansas Jayhawks. He worked there until 1992 and then transferred to Oregon. After working there for five years, In 1998, Turgeon moved to Philadelphia 76ers.

Turgeon signed with Jacksonville State as their head coach in 1998. He worked with the team for three-season and then moved to Wichita State. Mark remained the head coach of the team until 2007. During his tenure, The team won the 2006 MVC regular season. The same year, Mark won the MVC Coach of the Year Award.

In 2007, Mark moved to Texas A&M. He did not have a good season with the team and then moved to Maryland in 2011. He has been with the team and has a contract that keeps him until the end of the 2023 season. In 2020, Maryland won the Big Ten regular season. Lately, Juwan Howard was ejected from the game after sharing some verbal contest with Mark within a match.