2010s AP Coach of the Decade, Jay Wright was born on 24th December 1961, under star sign Capricorn. He holds an American nationality and belongs to the white ethnic background.

Jay Wright has an estimated net worth of $7 million as of 2020, mostly earned through his professional coaching career. Currently ranked 6th at the current NCAAB Coaches highest-pay list with an annual salary of $4.4 million from the Villanova, behind John Calipari, Mike Krzyzewski, and Mick Cronin.

Jay Wright has an estimated net worth of $7 million SOURCE: Medium

Most recently, the coach listed his Berwyn home for $2.5 million, in February 2020. The house covers 6,200-square-foot and features as six bedrooms, six full baths, six fireplaces, a three-car garage, a tennis court and a basketball court, and an inground pool, along with 1,100-square-foot living space over the detached garage. Originally, he scored the house in 2009 for $1.6 million.

Jay Wright is married to Patrica Wright. The couple met back during Patricia's college days in 1983 when she was a cheerleader. In 1983, she graduated from Villanova, where she studied law in school and is a lawyer, though she doesn't keep her license active. 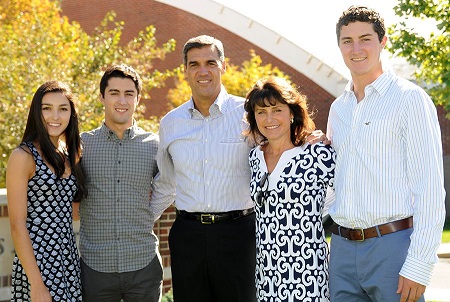 Jay Wright with his wife and children SOURCE: Fabwags.com

The couple shares three children together. Their eldest son, Taylor, is a graduate of Brown University who currently works as the Director of Operations for Villanova's baseball program. Further, the second one, Collin, studied at Fordham University and works for Vanguard. Whereas the youngest one, a daughter named Reilly, graduated from the University of Pennsylvania and is in a sorority as well as a ball girl for the Phillies.

Born as oldest of three, Wright was raised in Churchville in Bucks County, Pennsylvania, by his parents: Jerold and Judith.

Wright finished his high schooling from Council Rock High School North in Newtown, Bucks County, Pennsylvania. As a senior, he impressed scouts with a 69-point performance against rival Malvern Prep. Further, he also played basketball and became a member of the Sigma Chi fraternity at Bucknell University in Lewisburg, Pennsylvania.