If you love watching American college basketball then, Juwan Howard must not be a new name. Juwan is a well-known American basketball coach who has been working as the head coach of the Michigan Wolverines Men's team. Before working as a coach, Juwan played in the NBA from 1994 until 2013. He was the NBA Champion twice in 2012 and 2013.

Juwan Howard was born Juwan Antonio Howard on February 7, 1973, in Chicago, Illinois. He is the only child born to Leroy Watson Jr. and his wife, Helena Watson. His grandmother raised him from his early life. He was not close to his biological parents. His father was a U.S Army Officer. Juwan graduated from Chicago Vocational High School and enrolled at the University of Michigan.

Juwan Howard has an estimated net worth of more than $50 Million. As a basketball player, Howard earned more than $150 Million as his salary from his franchise. He might have made a lucrative sum from the endorsement, advertising, and sponsorships. He became the first NBA player to sign a $100 million contract. Howard was ranked among the top-15 highest-earning basketball along with Kobe Bryant and LeBron James. 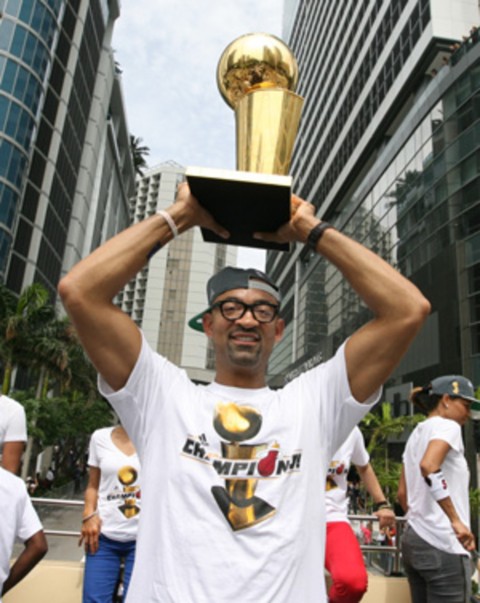 In 2019, Juwan agreed to a five-year deal with Michigan University that could be worth up to $11.2 million. His base salary is $400,000 each year, while his total compensation escalates with each season. His annual salary will increase by $1000,000, which starts from $2 Million. During his career as an assistant coach with Miami Heats, Howard earned $250,000 as his salary.

In 2021, Howard's received a total base compensation of $3.25 million under his restructured contract, up from the $2.2 million he was set to earn this year under his original deal when he was hired in May 2019.

Know About Juwan Howard's Wife and Their Children

Yes, You read that right. Juwan is the proud father of beautiful children. Juwan walked down the wedding aisle along with Jenine Wardally on July 6, 2002. The love birds had been dating each other for several years before their marriage. In September 2001, The duo was blessed with a son, Jace Right before their marriage. 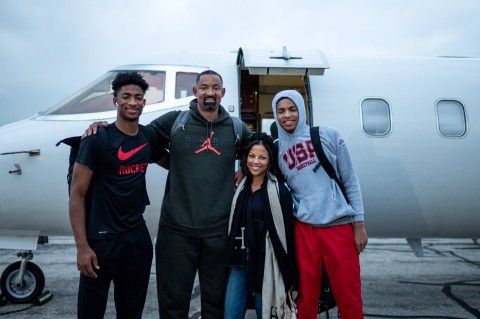 Juwan with his wife and their children SOURCE: Twitter @Juwan Howard

In 2003, the family of three extended to four after they welcomed another son, Jett. His elder son, Jace, currently plays high school basketball and holds multiple Division I recruitment offers. The family of four is living a happy and peaceful life.

Juwan started playing basketball from a very early age. He was part of the NCC division I men's Basketball Championship winner in 1992 and 1993. Washington Bullets signed him in NBA as the fifth overall pick in the 1994 NBA. He played with the team until 2001 and then signed a year deal with Dallas Mavericks.

For two seasons, 2002 and 2003, Howard played with Denver Nuggets and moved to Orlando Magic for a year deal worth $28 Million. In 2004, He signed with Houston Rockets and played with the team until 2007. From 2007 until 2010, the NBA player played with Miami Heat. In the very first year with the team, Heats lost the NBA final against Dallas Mavericks.

In 2012, Howard was part of the NBA Champion along with Dwayne Wade and LeBron James. The franchise won two back-to-back NBA Champion in 2013. After the NBA final, Howard became the oldest active player in the NBA at age 40 and soon announced his retirement and started working as an assistant coach for the former team. He worked with the team until 2019 and joined Michigan College as the head coach.