Marc-Andre Fleury is a Canadian ice hockey player currently playing for the Vegas Golden Knights of the National Hockey League as a goaltender.

The player was drafted in the 2003 NHL Entry by the Pittsburgh Penguins out of the Quebec Major Junior Hockey League (QMJHL).

Marc-Andre Fleury is a native of Sorel-Tracy, Quebec, Canada, born on 28th November 1984. His star sign is Sagittarius. By nationality, his is a Canadian and belongs to white ethnicity. Fleury was raised alongside his sister, Marylene Fleury by their parents: father, Andre Fleury, and mother, France Fleury.

Marc-Andre Fleury's Net Worth and Salary

As of 2018, Marc-Andre Fleury has an estimated net worth of $20 million. The significant source of his earning is Ice hockey career. The Canadian Goaltender spent his entire career with the Pittsburg Penguins, and in 2017, he switched to Vegas Golden Knights.

His salary throughout the seasons and upcoming salary are listed in the table below.

In the 2000-01 season, Fleury started playing major junior in the QMJHL for the Cape Breton Screaming Eagles. Following a solid 2002-03 QMJHL season that includes league Second Team All-Star honors as well as a silver medal with Team Canada at the World Junior Championship, he was selected first overall in the 2003 NHL Entry Draft by the Pittsburgh Penguins.

At the age of 18, Fleury made his NHL debut in the 2003-04 season as the youngest goaltender. On 10th October 2003, he played his first NHL game against the Los Angeles Kings, recording 46-save performance including a penalty shot save in a 3-0 loss. Later eight days, he recorded his first NHL victory in his second NHL game with 31 saves in a 4-3 win against the Detroit Red Wings.

On 21st June 2017, Fleury was selected by the Vegas Golden Knight in the 2017 NHL Expansion Draft. He has a successful debut with Golden Knights where he makes 26 saves in preseason win against Ducks.  During the 2018 NHL All-Star Game, he was chosen to represent Las Vegas.

Further, Fleury led his side to a win over the Winnipeg Jets in the Western Conference Finals on 20th May 2018, which allowed him to earn a shot at a 4th Stanley Cup.

Fleury won two silver medals for his national side at the IIHF World Junior Championships. In 2003, he made his senior team debut in Halifax. Although Team Canada loss in 3-2 against Russia in the gold medal games, he recorded a 1.57 GAA and was named the Top Goaltender and tournament MVP.

On 30th December 2009, he was called-up to Team Canada for the 2012 Winter Olympics in Vancouver. He didn’t make a single-game appearance in the tournament, but, as the goaltending duties were split between Roberto Luongo and Martin Brodeur, nonetheless, he still earned a goal medal as Team Canada defeated the United States 3-2 in the final.

At age 15, Marc-Andre Fleury met Veronique Larosee while he went to Cape Breton. In the initial phase, both developed a liking each other which gradually bloomed into a romantic relationship. After Fleury was selected first overall in the NHL Entry Draft, both have since relocated to Las Vegas in 2003. 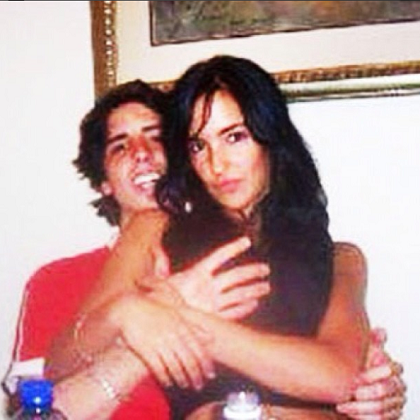 On 21st July 2012, the pair exchanged the vows in front of approximately 250 guests at Notre-dame Basilica in Montreal where the bride, Larosee wore a graceful, strapless, mermaid-style gown and carried a huge bouquet of white flowers.

Happy 4th anniversary to us

Not only lover, but the couple is also proud parents of their two daughters, Estelle born on 26th April 2013, and Scarlett, born on 22nd July 2015.

: Vegas, thank you for adopting us. We  you. What a year, what a group!

Till the date, there is no news and rumors popped out in media regarding extra-marital affairs, conflict, and divorce in their marital affair. Thus, Fleur is living a blissful life with his wife and two adorable daughters.