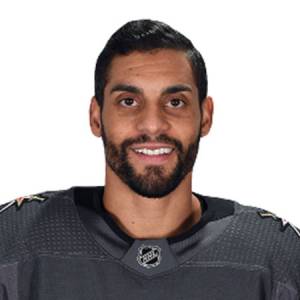 Bellemare is married to his girlfriend Hannah and has a son born in 2018 named  Léandre Lian Bellemare. Pierre has a total estimated net worth of above $3 million as calculated in 2019 and is currently receiving an annual average salary of around $1,450,000 from vegas Golden Knights.

Is Pierre Edouard Bellemare Married Or Single? Details About His Spouse

Pierre Edouard Bellemare is a married man and is married to his beautiful girlfriend Hannah. Currently, he is living a happy married life with his wife Hannah and his current residence is about 15 miles from downtown Vegas near the Knights' practice rink in Summerlin.

Pierre and his spouse are blessed with a lovely child, a son named Léandre Lian Bellemare born on January 5, 2018. Bellemare's is a multi-talented sports personnel since he is a fluent speaker of Swedish, Frenc and English language.

Best year of our life! All ready One!

Despite the busy schedule, he seems to spend a lot of time with his spouse and kid since he has posted several moments with them on social media. After further exploring his official social sites, it is found that he is a popular name in the ice hockey field since he has got lots of presents from his fans and friends on his birthday.

Pierre is very much conscious of his health so he does regular exercise and prefers hygiene food. Besides, he is alo involved in several charity works for needy and poor children.

Pierre Edouard Bellemare has a decent height of 6 feet tall (1.83 meters) along with a weight of 196 lbs (89 kilograms). Currently, Pierre is 34 years old. Furthermore, he has black hair and brown eyes.

How Much Is Pierre Edouard Bellemare Net Worth? His Salary And Contract Details

Pierre Edouard Bellemare has a total estimated net worth of above $3 million as of 2019. Bellemare is currently receiving an annual average salary of around $1,450,000 from the Vegas Golden Knights in 2019.

As far as his career earnings are concerned, Bellemare has earned a quite good amount of money from his professional ice hockey playing career around $4,900,000. He has currently signed a contract with the Vegas Golden Knights for two years in 2018 which is worth $2,900,000.

Thanks to all of you fans for tonight! It wasn’t the warmest night but you guys still showed up and made it a great evening, and of course thanks for those special presents! Thanks to @sportstown_dts for all the great knights gear and for the flawless organisation with @downtownsummerlin for this event! #mywifehadabitesofthatcupcakebeforethepic #christmascameearlythisyear

Besides, Pierre's previous contract was with the Philadelphia Flyers for two years signed on March 2, 2015, and the contract was worth $1.425 million. He hasn't mentioned any endorsements but he gets a lot of gifts from the Sports Town Downtown Summerlin, which deals in licensed apparel & novelties.

Paul Stastny and Marc-Andre Fleury are also in the list of the highest earners of the Vegas Golden Knights team since they have an annual average salary of around $7,500,000 and $7,000,000 respectively.

Pierre Edouard Bellemare was born on March 6, 1985, in  Le Blanc-Mesnil, France. Pierre is the third number child of his parents five children whereas his father birthplace was the Caribbean island of Martinique on French overseas.

Bellemare has four siblings including his sisters Rose-Eliandre Bellemare, Aurore-Annick. Pierre is Franch by nationality and belongs to the mixed ethnic group. In his early childhood, he studied in chiropractor school but was later offered to play in Sweden when he was 20 years old.

At the beginning of his professional career, he played for the French professional leagues. In addition to this, he played for several teams including Dragons de Rouen, Leksands IF, Skellefteå AIK of different ice hockey leagues like  Swedish Hockey League (SHL).

Pierre began his National Hockey League career with the Philadelphia Flyers on 11 June 2014, after signing a one-year contract and his first career NHL goal against Pittsburgh Penguins. During the 2016 season, he was suspended for an illegal check to Dmitry Orlov for one game.

Pierre was also named the alternate captain in 2017.  After ending his contract with the Flyers, he was selected by the Vegas Golden Knights on 21 June 2017. Besides his NHL career, he also played in several international tournaments for the French National team including 2010 IIHF World Championship.

Pierre is currently serving as the alternate captain of the Golden Knights team alongside Max Pacioretty, Reilly Smith, and Deryk Engelland.