Liz Marie is the wife of Tyler Heineman, an American professional baseball player who plays for the Pittsburgh Pirates of Major League Baseball (MLB). Heineman plays as a baseball catcher, and his jersey number on his current team is 54. Heineman has been playing for his current team since signing a deal with them on May 16, 2022.

Apart from being famous for his professional career, Heineman also gets into the spotlight regarding his love life. As we know, he is a married man, and Heineman has been sharing a solid marital bond with his loving and caring wife named, Liz Marie. Besides being married for over two years, Heineman and Marie have also started their own family as the pair welcomed their baby girl in July 2022.

Well, the celebrity spouse has not given any hints regarding her job or profession. Also, we can't say anything about her career earnings. At the moment, Marie may be taking care of her family as she is also a great housewife.

On the other side, her husband, Tyler Heineman, is a professional baseball player who takes a good salary from his team, the Pittsburgh Pirates of Major League Baseball (MLB). A baseball catcher in the United States earns around $29,157 per year or $14.02 per hour. 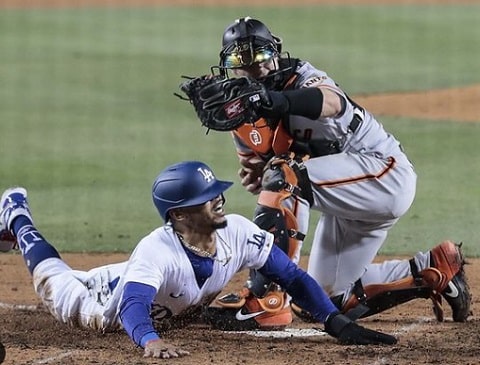 Heineman has played for multiple teams in the MLB and had an amazing deal with them. When Heineman played for the Toronto Blue Jays, Heineman had a deal worth $700,000. Currently, he plays for the Pittsburgh Pirates, and his adjusted salary with them is $546,132.

Furthermore, Heineman may also earn a good profit from doing advertisements with various companies or brands. The professional baseball catcher flaunts his lifestyle via his Instagram handle, and we can get updated on his life by following him there.

Their wedding attendees were their own family members and close friends, and the ceremony was organized at The Lodge at Malibou Lake. The professional baseball player Heineman also shared some moments of his wedding on his Instagram account. 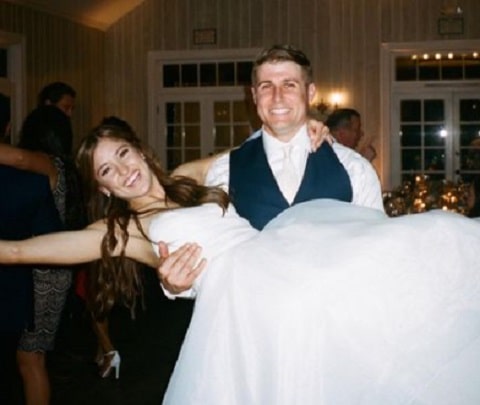 Liz Marie and her husband Tyler Heineman on their wedding SOURCE: Instagram @theineman13.com

Marie was wearing a beautiful white gown and was also carrying some white flowers to match her dress. Since 2019, the pair has been leading a happy married life, and they have already celebrated some years of their marriage anniversary. Being married for more than two years, Marie and Heineman have also given birth to a child.

On July 5, 2022, the loving duo welcomed their first baby girl named Emma Katherine Heineman. After welcoming their child, Heineman also shared some photos on his IG account, and he thanked the NICU team at UCLA for making their delivery successful.

Liz Marie is currently busy with her life and is keeping a distance from the media. Her intimate personality makes it more challenging to know about her professional life. As she just gained public attention as the wife of Heineman, we will take a look at his baseball career.

Heineman went to the Windward School in Los Angeles. Heineman played college baseball for the UCLA Bruins. Meanwhile, the Los Angeles native started his professional career after being drafted by the Houston Astros team in the eighth round of the 2012 MLB draft. Furthermore, he also played for the Tri-City ValleyCats of the Class A-Short Season New York-Penn League.

Later, Heineman also played for other teams like the San Francisco Giants, St. Louis Cardinals, Philadelphia Phillies, and Toronto Blue Jays. On May 16, 2022, Heineman signed a contract with the Pittsburgh Pirates, and now he plays with them.

Liz Marie was born in the United States of America. So, Marie holds American nationality. Apart from that, she has not shared her birth details with media outlets, and none of them have mentioned her actual age. However, Marie appears to be in the same range as her husband, who is 31 years old as of 2022.

Coming into the early life of Heineman, was born on June 19, 1991, as Tyler Andrew Heineman in Los Angeles, California. Heineman grew up along with his brother named, Scott Heineman. The Heineman brothers were raised by their parents named, Steve and Kathy. 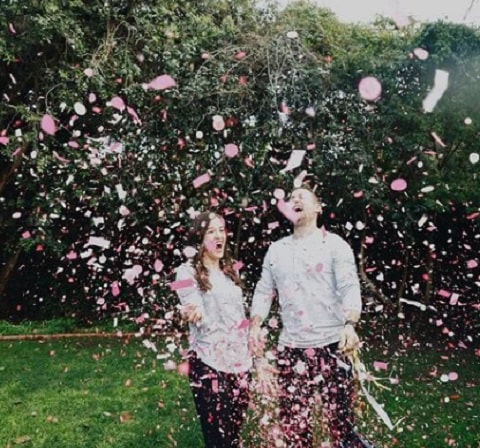 Liz Marie and her husband at their baby shower SOURCE: Instagram @theineman13.com

His dad, Steve, appears to be a former police officer as he worked in the Santa Monica Police Department. Likewise, his brother, Scott, is also engaged in the same field, and he plays as a baseball outfielder and first baseman. At the time of this writing, Scott is a free agent, but in the past, he played for various teams like the Texas Rangers and Cincinnati Reds.

Liz Marie uses Instagram, and she is registered there under the username @lizbrancooo. At the time of this post, Marie has gained more than 300 followers. As she is pretty aware of her privacy, Marie has also managed to keep her account private. Liz Marie with her husband and dog SOURCE: Instagram @theineman13.com

So, we cannot explore her current lifestyle. In the meantime, her husband, Heineman, is strongly available on Instagram, and his username is @theineman13. Over 8k people have followed him there.