Liam Eichenberg is an American football player who plays as an offensive tackle for the Miami Dolphins of the National Football League. Wearing shirt number 74, Eichenberg is one of the most critical players on his team who gives his best on the field.

Furthermore, Eichenberg played college football at Notre Dame. And his professional career began when the Miami Dolphins drafted him in the 2nd round of the 2021 NFL Draft. Moreover, Eichenberg comes from an athletic family background, as he has a brother who is also engaged in the same field.

The Cleveland native, Eichenberg, attended Saint Ignatius High School. He played in 2016 Under Armour All-American Game. And in 2015, Eichenberg executed to playing college football at the University of Notre Dame. 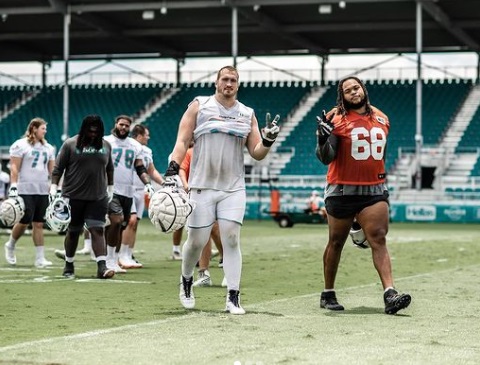 Liam Eichenberg with his teammates after a match SOURCE: Instagram @liameichenberg.com

After redshirting Eichenberg's first year at Notre Dame in 2016, he played in five games as a backup in 2017. In 2018, he took over as the starting left tackle and began every match for the team until 2020. Moreover, Eichenberg's professional career kicked off after getting drafted by the Dolphins in the 2nd round with the 42nd overall pick of the 2021 NFL Draft.

On July 27, 2021, Eichenberg signed a four-year rookie deal with Miami.

How Much Is His Net Worth? His Salary Disclosed

Eichenberg makes most of his income from being an American football player and is currently signed with the Miami Dolphins. According to Spotrac, Eichenberg's deal with the team is $8,014,479. The respective contract includes a $3,188,712 signing bonus and $4,213,007 guaranteed. Liam Eichenberg and his teammates celebrating after a v SOURCE: Instagram @liameichenberg.com

Considering this fact, it can be said that Eichenberg enjoys a net worth of around $1 million. His actual net worth remains a mystery as none of the media outlets have shared the truth.

The American football player appears to be leading a single life, and there is no record of Eichenberg having a girlfriend. Till now, Eichenberg has not shared a single post of his love life on his Instagram handle, due to which we can assume that he is not engaged in any romantic affair.

On the other hand, Eichenberg is also a private guy, just like Ariel Pestano and Tucupita Marcano, who prefer to keep their matters far from the people's eyes. So, it is pretty challenging to know about the life of Eichenberg too. 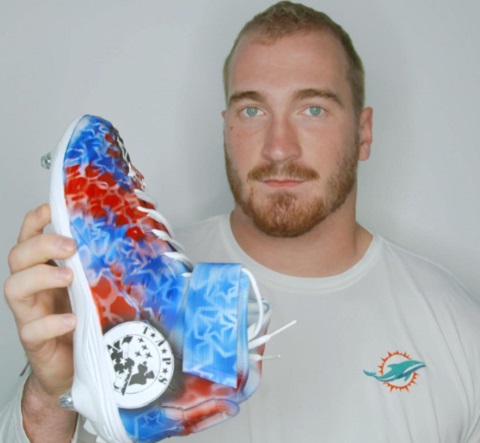 However, we can explore his ongoing lifestyle by following Eichenberg on Instagram as @liameichenberg.

Who Are Eichenberg's Parents? His Brother

Liam Eichenberg was born to his supportive parents on January 19, 1998, in Cleveland, Ohio. So, Eichenberg holds an American nationality, and his height is 6 feet 6 inches which is 1.98 m.

As of now, Eichenberg has not given the names of his parents. But we know that Eichenberg is not only his parents' child, as he has a brother named Tommy Eichenberg. Tommy is an American football linebacker playing for the Ohio State Buckeyes.