George Krieger Kittle a.k.a. George Kittle is a professional American football tight end who is currently signed to the San Fransico 49ers of the National Football League (NFL). He finished his collegiate career at the University of Iowa Hawkeyes and was picked by the 49ers in the 2017 NFL Draft in round five. 2x Pro Bowler and a First-team All-Pro selection, Kittle set the single-season record for receiving yards by a tight end with 1,377.

How Much Is George Kittle's Net Worth? Know His Contract, NFL Career Earning, & Salary

Jimmy Garoppolo, Dee Ford, and Richard Sherman are the highest-paid roosters of the team.

Who is George Kittle's Wife?

George and his future wife, Claire Kittle met during their freshman year in college. Reportedly, George approached her as she was heading to basketball practice on her moped, and complimented her bright pink helmet. After seeing for some time their friends gradually turned into romance.

Upon graduation, George went for NFL while Claire signed on with JE Models as a fitness model and now is the owner of Claire Till Fitness. 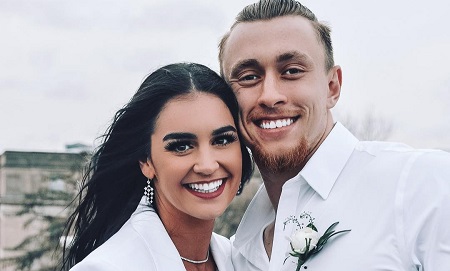 In the summer of 2019, George got down on one knee. Later in the year, the pair exchanged the vows on 9th April and have not been shy about sharing their relationship on their IG since.

George was born to Jan Krieger and Bruce Kittle who is also played at Iowa and is a former college football coach. Her mother was a star athlete at Winfield Mount-Union and her best sport was basketball, and she went on to score more than 1,800 points for Drake at the Division I level. George's maternal family is well-known for athletics in southeast Iowa.

Kittle was selected by the San Francisco 49ers in the 5th round with 146th overall pick of the 2017 NFL Draft. On 4th May 2017, he signed his first professional contract with 49ers which would span 4 years. On 13th August 2020, he signed a new five-year contract with the team.