Leah Ann Letson is an American Mixed Martial Arts (MMA) fighter who is currently signed to the Ultimate Fighting Championship (UFC) under the featherweight division. Earlier, she competed at KOTC, Pure FC, Premier FC, and Invicta.

Janesville, Wisconsin native, Leah Letson was born on 21st August 1992, under the star sign Leo. The twenty-nine years old holds an American nationality and is of white ethnic background.

Turned professional in 2014, Leah Letson has compiled a pro record of 5-1-0. Before signing to the UFC, she competed at various aspromotions KOTC, Pure FC, Premier FC, and Invicta, earning four to five digit per fight.

Besides from fight, MMA fighters makes a good deal of sum from sponsorships and endorsements.

Also, she serves as US Air Force. According to the source, the US Air Force has an averae salary of $60079.

Leah Letson is engaged to be married. 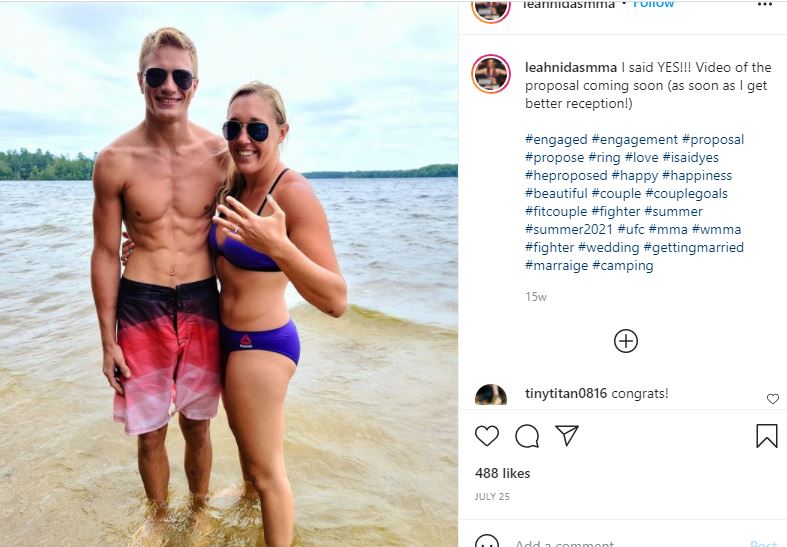 In July 2021, she said yes to her boyfriend, Dustin Donald.  She posted a  picture of her engagement flaunting a ring on IG. She captioned, "I said YES!!! Video of the proposal coming soon (as soon as I get better reception!)"

After compiling an amateure MMA record of 4-0-0, Leah made her professional MMA career debut at KOTC - Industrial Strength on 22nd November 2014. Nevertheless, she loss the fight via split decision.

He then faced Shaena Cox at     Pure FC 2 - Pure Fighting Championships 2. He knocked Cox out in round two.

On 30th November 2018, Leah faced Julija Stoliarenko at UFC - The Ultimate Fighter 28 Finale. He won the boit via split decision.

Leah is scheduled to face Felicia Spencer on 13th November 2021.