Kyle Alexander Kuzma, well-known as Kyle Kuzma, is an American professional player who plays as a power forward/small forward for Washington Wizards. Before becoming a professional, Kuzma played college basketball for Bentley and was picked 27th in the 2017 NBA draft by Brooklyn Nets.

Kuzma earns about $13 million as a salary from the wizards in 2022 and has an estimated net worth of $10 million. He is currently dating his girlfriend, Winnie Harlow.

Kyle Kuzma's Net Worth and Salary

LeBron James is the highest-paid player in the Lakers, with an annual salary of $35 million.

The 26 years old Los Angeles Lakers star has recently signed an endorsement deal with Nike. Recently in October, he signed an agreement with GOAT being the first brand ambassador. GOAT is the world's largest marketplace for authentic sneakers, and Kyle will be wearing the NIKE shoes provided by GOAT on and off the field. 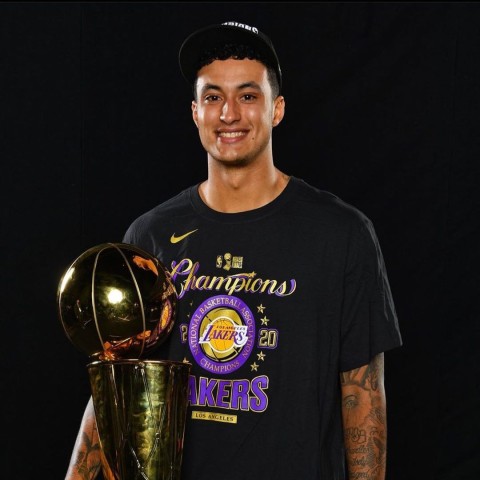 Moreover, Kyle has also signed a deal with Budweiser. Earlier in 2018, Kyle bought his first car, a Porsche. Besides, he also has a '70 Cadillac DeVille for riding.

Kyle is very open about his relationship status. The NBA player is dating his longtime girlfriend, Winnie Harlow. The love birds have been together for more than a year. They first posted a photo of them together in late 2020. Winnie is a Jamaican-Canadian fashion model and public spokesperson for a vitiligo skin condition. Both are very open about their relationship status and very much support. They are yet to get engaged and tie their wedding knot.

Kyle Kuzma is not married yet. However, he dated his former girlfriend, Katye Elise Henry.

Kyle's girlfriend, Katie, was in the limelight after she trolled one of Brandon Ingram's girlfriends, Raelynn Inez. Katya Elise Henry trolled Inez by showing her that Kuz got her and her friend tickets in the 100s sections while Inez is still stuck in the 200s.

Inez is a stripper at Crazy Girls in LA. Ingram is said to have kept her there to keep her out of his family and friends' sight.

Katie is an Instagram fitness model and has around 5 million followers on her Instagram account. She is reported to have dated several other athletes in the past.

He is very close to his mother, Karri. He has an unbreakable bond with his mother. His mother got pregnant when she was a student of Hillsdale College on a track scholarship in the 1990s. Kuzma's mother ended her career, left her college and dreams that she waved, and started her life as a single parent.

Kuzma has a perfect persona and a great athletic ability. He has a gigantic height of 6'9", around 2.06m. He has a balanced weight of 101 kg.

Kyle Kuzma was born on July 24, 1995, in Flint, Michigan, the United States, to an American parent, Karri Kuzma. He holds an American nationality. Born in late July, his zodiac sign is Leo.

His mother, Karri was a high school shot put champion. His father left his mother as an infant and married another woman. He has a younger half-brother and a sister named Andre and Briana.

His mother later got married to Larry Smith, who is a father figure to him. Kyle attended Swartz Creek Community Schools and then transferred to Bentley High School.

Since childhood, Kuzma developed a true dedication and devotion to basketball. He decided to become a basketball player, and his parents supported his decision.

Kyle Kuzma went to Bentley High School before transferring to rising Academy in Philadelphia. Upon high school graduation, Kuzma enrolled at the University of Utah in 2013. He played outstandingly during his college years.

In his sophomore and junior years, he had 16.4 points per game and had 9.3 rebounds and 2.4 assists as a contest. For his remarkable efforts, Kuzma was recognized with 2017 All-Pac-12 First-Team honors.

After the 2016-17 Campaign, Kunza forewent his senior year and entered the 2017 NBA draft. He later graduated from the university with a degree in sociology.

Kuzma was drafted into the NBA by the Brooklyn Nets in the 27th overall NBA draft. That same day, he and Brook Lopez traded to Los Angeles Lakers in exchange for D'Angelo Russell and Timofey Mozgov.

On November 3, 2017, he appeared as a  starter in the match against Brooklyn, where he recorded a double-double with 21 points and 13 rebounds. In 20 games, he averaged a team-high 16.7 points. He was also named to the NBA All-Rookie First Team in MAy 2018.

In early 2021, Kuzma got traded to the Wizards as part of a package for Russell Westbrook.