Brook Robert Lopez a.k.a. Brook Lopez is an American professional basketball player currently signed to the Milwaukee Bucks of the National Basketball Association (NBA). After playing two years of college basketball for stand ford, he was selected 10th overall by the nets in the 2008 NBA draft. Further, he also played for the Los Angeles Lakers (2017–2018).

The thirty-one years old hunk has an estimated net worth over $50 million and his annual salary is reported $3.3 million. Furthermore, he is dating his girlfriend.

Brook Lopez Net Worth and Salary in 2019

Lopez has an estimated net worth over $50 million as of 2019, mostly earned through his NBA career. Thus far he has summoned $120,805,487 as his career earnings from the NBA, playing 11 seasons. 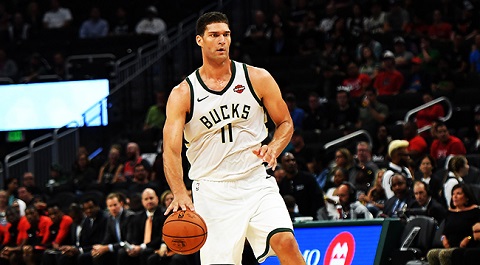 Lopez's net worth salary was 14 million dollars before the 2015-16 season started and he made his net worth more than he had in his bank account during the season. Further, he reportedly had a net worth of $30 million around 2016 which would increase with his guaranteed 43 million dollars for the next two seasons.

Brook Lopez Personal Life; Who is his Wife?

Regarding his relationship status, the NBA star is neither single nor married. Currently the handsome is in a relationship with his long-time girlfriend, Hailee Nicole Strickland. It seems Lopez and Hailee started dating sometime around 2012. 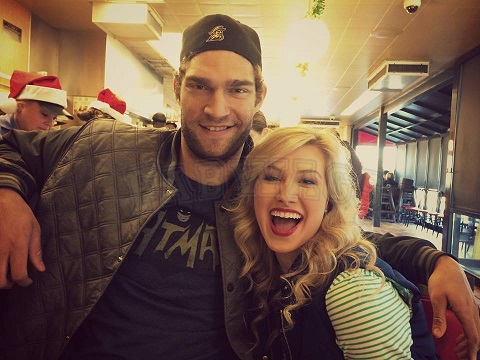 His lady, Hailee is a senior digital and marketing specialist at Townsquare Interactive. She is a proud graduate of Appalachian State University, earning a Bachelor of Science in Apparel Design, Merchandising, and Marketing in 2015.

Lopez, later on, moved from Hollywood to Oak Harbor, Washington to be near to his elder brother Alex. He was in second grade and Alex was playing basketball at the University of Washington during this time. After a year he moved to his hometown of Fresno, California and attended San Joaquin memorial high school. There he played basketball with his twin brother Robin and Quincy Pondexter, a fellow NBA player.

Lopez's first season was the 2006-2007 basketball season which was at Stanford University where he was honored as an all-Pac-10 mention. He scored 12.6 points and 6.0 rebounds over the course of the season.

He then scored 19.3 points, 8.2 rebounds, 1.5 assists and 2.1 blocks per game in his next season. He hit the game-winning shot at the buzzer against the Marquette Golden Eagles in the second round of the 2008 NCAA tournament.

He was drafted by the New Jersey nets 10th overall and his twin brother, Robin was drafted 15th overall by the phoenix suns. He played his first NBA game in a 95-85 nets win on October 29, 2008. The worst history in NBA start to a season, it was started by the nets in the 2009-10 season going 0-18. Due to this start, the head coach Lawrence Frank was fired by the nets.

On December 4, 2009, the Nets won their first game against the charlotte bobcats 97-91. Lopez was established as one of the best in career scoring 36.9 per game, 8.6 rebounds per game averaging 18.8 points per game in his second season. He played in all 82 regular season games for the third consecutive year in his third NBA season.

The Nets re-signed Lopez for a four year 61 million dollars extension on July 11, 2012. He got off to a wonderful start, scoring 27 points in the season opener against the Toronto Raptors in this year. NBA commissioner David Stern selected Lopez in the NBA all-star to play the game on January 30, 2013. His first appearance in all-star finished the game with 5 rebounds, 3 assists, and 3 points in 11 minutes which came from the free-throw line. He was replaced with Rajon Rondo who had suffered a season-ending ACL injury.

He scored 27 points and 7 rebounds in an overtime win over the phoenix suns on November 15, 2013. On December 20, 2013, the nets announced him out of the remaining season due to his foot which occurred the night before the game against Philadelphia 76ers. On November 3, 2014, he made his debut after missing the first two games due to a foot injury. He scored 18 points, 6 rebounds, 2 blocks and 1 steal in the 116-85 win against the Oklahoma City Thunder in just 24 minutes of action.

Lopez re-signed with the nets for a three- year deal on July 9, 2015, and on December 8, he became the sixth player to make 400 starts for the Nets franchise in a win over the Houston Rockets. He recorded 30 points and 13 rebounds in a 100-97 win over the Boston Celtics on January 2, 2016. He was declared eastern conference player of the week two days later.

On June 22, 2017, he was traded to the Los Angeles Lakers along with the rights to Kyle Kuzma in exchange for Timofey Mozgov and D'Angelo Russell. On July 17, 2018, Lopez signed with the Milwaukee Bucks.