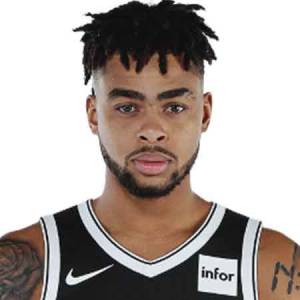 D'Angelo Russell is an American professional Basketball Player player who plays in the National Basketball Association (NBA). Russell currently plays for the Brooklyn Nets who acquired him in 2017 as their Point Guard.

Russell shall earn $7,019,698 as his yearly salary from Brooklyn Nets for the 2018-19 season. Further. Russell has an estimated net worth of over $12 million. Aside from basketball, Russell has also gained fame for dating beautiful girls.

D'Angelo Russell's Net Worth and Salary

The point guard of Brooklyn Nets, D'Angelo Russel currently has an estimated net worth of over $12 million.

RIP Grandma Look at your grandson

D'Angelo Russell is currently rumored to be in a relationship with Gabby Engersgaard. The two have been spotted together on various occasions, one such occasion includes a Yankees game. Russell has yet to acknowledge the rumors.

D'Angelo Danté Russell was born on February 23, 1996, in Louisville, Kentucky to parents Antonio Russell and Keisha Rowe.  Russell attended Montverde Academy in Montverde, Florida where he played for his high school basketball team.

Russell enrolled at Ohio State University and played for the Ohio State basketball team in his collegiate career. He became the recipient of the Oscar Robertson Trophy, Wayman Tisdale Award, and Jerry West Award in 2015.

In the 2015 NBA draft, D'Angelo Russell was drafted by the Lost Angeles Lakers with their second overall pick.

Russell had an impressive rookie season becoming the youngest player to hit 130 three-points in a season and leading all rookies in steals per game with an average of 1.2 steals per game. He was named to the NBA All-Rookie Second Team honors as well.

The Lakers traded D'Angelo Russell to the Brooklyn Nets in exchange for Brook Lopez, the rights to Kyle Kuzma and the 27th pick in the 2017 NBA draft.on his first season with the Nets, he recorded 15.5 points, 3.9 rebounds and 5.2 assists playing in 48 games.