Herbstreit is a former footballer and played as a quarterback for the Ohio State Football team. He has the net worth of about $4 million. He is married to his wife Allison Butler and has four children.

Kirk Herbstreit has an estimated net worth of $4 million as of 2019. Furthermore, the journalist is earning a considerable amount of salary. He still works for ESPN and has the contract that will keep him with the network until 2022. As per the contract, he receives around $2 million as annual salary as claimed by several sources.

Herbstreit is one of the most decorated college football reporters. He is assumed to be the top paid announcer along with Cris Collinsworth.

Here's another picture with Wisconsin Badger great Melvin Gordon. Melvin had an incredible season and did it while remaining humble and grounded!

He was also a top-rated college football player and also a standout baseball player.

Kirk Herbstreit is also involved in charity works. He actively took part in raising funds for programs like 2012 Buckeye Cruise for Cancer and The Make A Wish Foundation Ultimate Sports Auction.

He has countless admirers on social networking sites. His fans are largely growing on Twitter. Moreover, the detail of his life and bio can be taken from Wiki.

Kirk Herbstreit is married to Alison Butler since 1998. He met his wife Alison at Ohio State where she was a cheerleader. He currently lives in Nashville, Tennessee area with his wife and children.

The couple has four sons together named Tyle Herbstreit, Zak Herbstreit, Jake Herbstreit, and Chase Herbstreit. His twin sons are currently studying in Nashville's Montgomery Bell Academy where they are athletes. 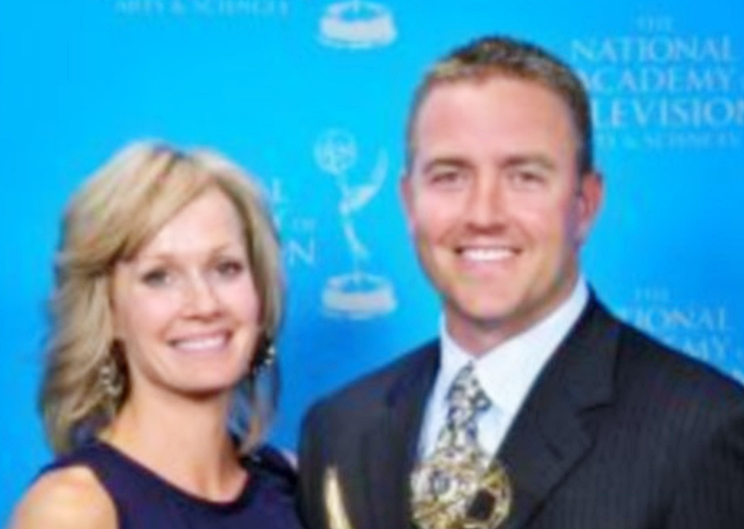 Once there was a rumor about Kirk having an extramarital affair with Erin Andrews but later it proved to be fake. Erin is a sportscaster and television personality. He was rumored to have divorced his wife Allison in 2007. However, as of 2019, he is still married to her and doesn't have an extramarital affair or girlfriend.

Herbstreit is a family man. From his busy schedule, he spends quality time with his family. He likes traveling, watching sports and music is his passion. He often attends his sons game to support them. In September 2018, Kirk balancing his job attended the college football venue to watch his sons play.

His twin sons, Jake and Tye are in the senior year, and son Zak, who is in a sophomore year.

He is philanthropic and has been involved in several humanitarian works. His charity work includes The Make A Wish Foundation Ultimate Sports Auction and the 2012 Buckeye Cruise for Cancer.

Kirk Herbstreit was born on August 19, 1969, in Centerville, Ohio to Jim Herbstreit and Judy Herbstreit. His father Jim was a sports player and previously served as an assistant coach at Ohio State.

He holds an American nationality and his ethnicity is white.

Kirk Herbstreit completed his graduation from Centreville High School in Centerville, Ohio, a suburb of Dayton. During high school, he was enthusiastic about football. He played as a quarterback for the ELKS and played for the Ohio State football team.

At his senior year, he was honored by Ohio Gatorade Player of the Year. Later on, he joined Ohio State University and played quarterback for four years.

After ending his football career, Herbstreit shortly after started his commentating career joining the expert panel in ESPN College GameDay set along with Desmond Howard, Rece Davis, and Lee Corso. They discuss and analyze the college football games, highlights and player profiles.

He then joined ABC Sports and currently works for the network as an analyst for ABC Sports' college football primetime series appearing with Chris Fowler.

He won the nomination for a 1997 sports Emmy but failed to win. With him, Howie Long, Cris Collinsworth, Terry Bradshaw, and Steve Lyons got nominated. On June 28, 2010, Kirk Herbstreit publicly announced that he would be a host of weekly college football radio programs on 97.1 The Fan in Columbus.

Earlier, he also worked as the panelist for the series "Who's Now" in 2007.

Herbstreit recently praised Nick Saban and described him as not only the greatest coach in college football history but the greatest in any sport. He also made comments over Georgia defensive back Deandre Baker most recently as Baker was out of the Sugar Bowl but traveled with the team to Georgia’s bowl game against Texas.