Erin Andrews born as Erin Jill Andrews is an American professional sportscaster, journalist, and television personality. She currently hosts a show called Dancing with the Stars for ABC and is a sideline reporter for NFL on Fox. She started her career in 2000 after she was hired by Fox Sports Florida as a freelance reporter and later in 2001, she also worked as a Tampa Bay Lightning reporter for the Sunshine Network.

Erin Andrews earns around $2 million as an annual salary and has an estimated net worth of $4 million. She is currently dating her boyfriend Jarret Stoll.

Erin Andrews has an estimated net worth of $20 million as of 2022, including all of her properties and incomes. She enjoys a huge salary of $2 million annually from Fox NFL which is $1 million more than fellow Sportscaster, Charissa Thompson.

She also earns some amount from her endorsement deals with brands like Degree Deodorants, Mountain Dew’s Diet sports drink, Florida Orange Juice and, Victoria’s Secret lingerie. She also had a promotion deal with Zig Tech collection and Reebok but later collapsed due to her conflict with ESPN.

Moreover, she was awarded $55 million in her lawsuit against a stalker who leaked her nude videos.

In October 2019, she teamed up with  an American online retailer of  sportswear, sports equipment, and merchandise, Fanatics.

Erin is also actively involved in charity works. She has been a part of various charity events such as Feeding America’s Fight Hunger Campaign, StubHub’s Girls Night Out, the American Red Cross’s Music Builds CMT Disaster Relief Concert and many more.

Personal Life of Erin Andrews; Is she married?

Erin Andrews, currently 43, is married to her long-term boyfriend Jarret Stoll. The couple began dating in 2012 and were engaged in December 2016. 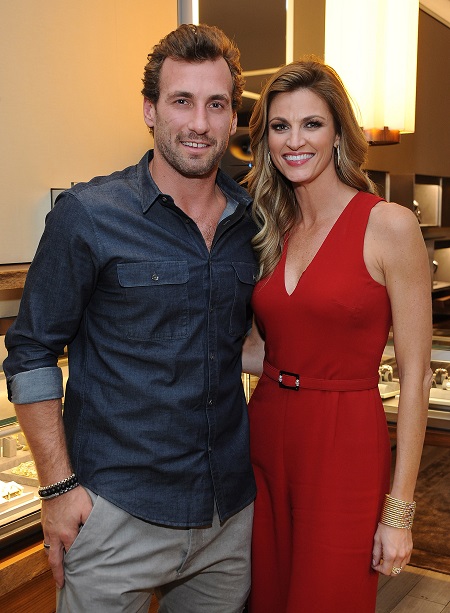 Andrews and Stoll tied the knot on June 24, 2017, in a romantic ceremony in Montana while surrounded by friends and family. Their wedding took place on a mountaintop Yellowstone Club at sunset.

The couple is living a blissful married life.

There were rumors about her having an affair with actor Chace Crawford before her current partner, Stoll. Prior, she was also linked with an American football player Aaron Rodgers and actor Josh Hopkins.

Back in 2018, the famous sportscaster was once caught in a controversy where a video of her curling her hair while squatting naked in front of the mirror was posted on the NSFW POA site without her knowledge. The video was leaked by a stalker named Michael David Barrett who had two serve 2 years of prison and pay $55 million in a lawsuit.

Erin was also voted as the “America’s Sexiest Sportscaster” by Playboy magazine two times (one in 2007).

Born on 4th May 1978 at Lewiston, Maine, United States, Erin was hugely influenced by her six-time Emmy award-winning journalist father, Steven Andrews. Her mother Paula Andrews is a teacher.

She graduated from Bloomingdale High School in Valrico, Florida and attended Brandon School of Dance Arts in Seffner, Florida. Later, she went to the University of Florida for her further studies where she acquired a degree in Bachelor of Arts (BA) in Telecommunications.

In school, Erin Andrews was a member of the dance team, student government, and the National Honor Society. She was also a former member of the Zeta Tau Alpha sorority and Florida Gators Dazzlers dance team. Erin’s sister, Kendra Andrews, is also a professional dancer and actor.

Erin Andrews started her career in 2000 after she was hired by Fox Sports Florida as a freelance reporter. Later, in 2001 she worked as a Tampa Bay Lightning reporter for the Sunshine Network. She has also covered the Atlanta Thrashers, Atlanta Braves, and Atlanta Hawks for the Turner South network as a studio host and reporter.

Then, in 2004 she was offered by ESPN to work as a reporter for ESPN National Hockey Night. Similarly, she has been hosting several popular shows and events such as College GameDay, Good Morning America, Super Bowl and so on. She left ESPN in 2011.

Andrews has currently been hosting the Fox College Football for Fox Sports and Dancing with the Stars for ABC. She was also voted as “America’s sexiest sportscaster” by Playboy magazine in 2007 and 2008.

In 2014, Andrews replaced Pam Oliver as the sideline reporter on Fox's lead NFL broadcasting crew and works with Joe Buck and Troy Aikman in the announcement team.