Christopher Brady Fowler a.k.a. Chris Fowler is an American sports broadcaster currently serving for ESPN. He is best recognized for his stint on College GameDay (1990-2014) and college football.

Born on 23 August 1962, Chris Fowler is also a regular anchor on ESPN for coverage of tennis and soccer. In 2014, he joined Saturday Night Football on ABC replacing Brent Musburger having him on ESPN's top announcing team alongside fellow College Gameday's Kirk Herbstreit.

How Much Is Chris Fowler Salary and Net Worth in 2020?

Denver, Colorado native, Chris Fowler has an estimated net worth of $7 million as of 2020. Further, his annual salary from ESPN is reported to the $3 million and is one of the highly paid ESPN personalities.

Is Chris Fowler Married? Who is his Wife?

Chris Fowler married his girlfriend, Jennifer Dempster, former fitness model. The couple met at the ESPN company Christmas party in 1990. Over time and several vacations together, their love grew and one fine day Chris proposed Jennifer over coffee on the balcony of Paris hotel room. 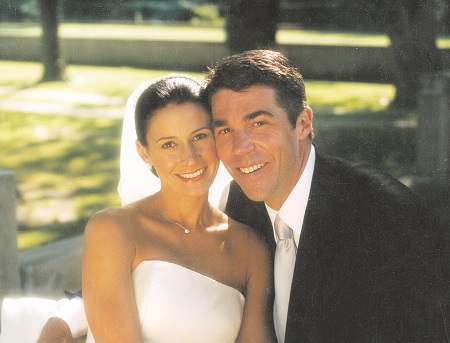 In 2006, the couple tied the knot at Oheka Castle. The bride, Jennifer flaunted in the gown by Lazaro and her make up was gracefully done by Donna Bardot.

Chris Fowler was raised in Rockford, Illinois. His father was a theater professor at Pennsylvania. When he was a child, his family relocated to Colorado Springs. In Colorado, he graduated from General William J. Palmer High School.

Chris Fowler was born and raised in a middle-class family. He was born in Denver, Colorado, United States. He is American. His ethnicity is white. His birth sign is Virgo. There is no update regarding his siblings. Upon completing his high school graduation, Chris Fowler attended the University of Colorado. In 1985, he graduated from University. He received a degree in Bachelor of Science.

While an undergraduate, he worked as a producer and associate host for a television system in Boulder, Colorado, from 1983 to 1985. Later on, he also worked two years as a sports director at KAIR-AM, the University’s radio station. In the University, he also got an opportunity to cover high school sports for Rocky Mountain News.

Prior to landing his steps at ESPN, he worked two years at KCNC-TV. Then, he served as a production assistant as well producer, writer, and sports reporter. In 1984, he worked for KMGH-TV as an intern in the department of sports

In 1986, he joined ESPN as the host reporter of Scholastic Sports America. In 1988, he started working as a college football sideline reporter for the two seasons. In Feb 2015, he was appointed in place of Race Davis and presented him as the host of GameDay. As of now, he has covered several stories and events for ESPN that includes College Basketball, Wimbledon, Australian Open, French Open, and US Open.

Chris Fowler has a height of 6 feet and 3 inches, which is around 1.90m. He is popular on social media.