Khamzat Achmedovitj Chimaev is a Chechen Swedish fighter and MMA athlete who was born on 1 May 1994. He is a Swedish champion in freestyle wrestling and has been active in the MMA organization since 2020. Recently, he illustrated UFC 's battle island as a brand new prospect. Likewise, he has gained momentum for fighting twice in 10 days gap in two different divisions for the UFC.

He also has gained media attention as the training partner of another Swedish fighter Alexander Gustafsson and was praised by the UFC president Dana White for fighting twice in less than 15 days. He also has made headlines for asking Dana White to book him a spot on Meocic Vs DC 3 going down in August. With only two fights into the championship, he has already started calling athletes like Usman, Conor McGregor, Demian Maia, and WW's brawl king Mike Perry.

Through former promotions, Khamzat Chimaev received around $180 thousand and from his initial bout in UFC fight island he received $12,000 for appearing in the fight and added $12,000 in win bonus. Likewise, he received $3500 in sponsorships and also gained 50,000 in his debut performance of the night. Hence, in his first-ever UFC event, Khamzat Chimaev made $77,500. 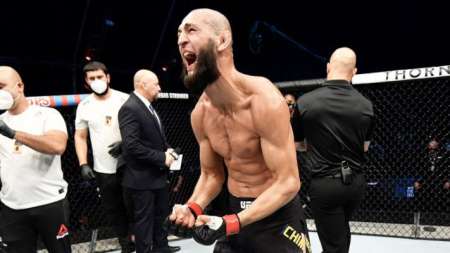 His second match against Rhys McKee, he received the same payments and made $77500 along with a second performance bonus from the UFC. So in total, Khamzat made a total of $155,000.

In 2011, Chimaev came to Sweden as a refugee and in 2019, he was able to bring his whole family from Chechnya's whole to Sweden. After his asylum was approved he first lived in Malmö, then Khamzat ended up in Lidköping and started wrestling for the Lidköpings AS club where he took SM-Gold.

He wrestled in Chechnya at a high level before moving to Sweden and represented his country's national team. As per Khamzat, the first time he stepped on the mat was when he was only a year old. As per him, he lived across the street from his wrestling club. So, he started wrestling at the age of five.

He then played in 18 kg weight class when he was only 5 years old. Though Chimaev never practiced judo and sambo, he also competed in national level Judo and Sambo wrestling as well.

Earlier on, he was a national Swedish Welterweight and middleweight freestyle wrestling champion. Then he entered MMA signing up with IRFA, 14 on May 26, 2018. After winning two IRFA matches in Norway, he entered the Brave FC.

Chimaev, at Brave CF 18 won his two initial matches and in Brave CF 20'th match he took on an American fighter American Sidney Wheeler in just nine days' notice, at middleweight. Chimaev finished the American via TKO in just 35 seconds in the first round. After his five straight wins in Brave FC, his friend and training partner Alex "The Mauler" Gustafsson announced that he would fight for the Brave FC title against its champion Jarrah Hussein but the match got canceled due to COVID threats and Khamzat joined the UFC in its second fight island setting.

Khamzat Chimaev on 9th July from his Instagram confirmed that he has signed a UFC contract and would fight in the middleweight 185 lbs / 83.9 kilos weight class in a UFC event held at Abu Dhavi "Fight Island" on July 15, 2020. Chimaev dominated the match with Welshman John Philips and won via d'arce choke in the second round.

According to match statistics, Chimaev threw 124 shots whereas Welshman was able to throw only two shots at him. Then he went down to welterweight 170lbs/77 kg, which is his natural weight class, and fought Northern Irishman Rhys McKee and ended the fight in 3.09 minutes in finished on TKO.

As talked earlier he lives with his parents in Sweden and respects elderly people, hence he has despised Conor McGregor who once punched an old man and has shown interest in fighting mike Perry who recently hit an old man as well. So far, information about his marriage or girlfriend isn't out and we have a lot to learn about this up and coming MMA prospect.

UFC president after his two performances in the UFC has spoken great things about Khamzat and is willing to fly him in for DC Vs Miocic 3 which will be held in the US territory.

Let's take a look at Playerswiki YouTube team's effort to introduce Khamzat on this Video:

As per the US today, uncle Dana said:

“I mean, you know? The guy is so dominant, so confident, wants to continue to fight every weekend. I love it. I love guys with that mentality. I love how talented this guy is. We threw the hottest prospect out of the U.K. at him and that kid is a badass. That kid is a legit great fighter. (Chimaev) made it look like he didn’t belong there. … The kid is legit. He’s real and he knows it and I love it.”

His recent two-division debut wins has created a huge buzz in the MMA communities and reporter Ariel Helwani among many, have been his biggest supporters.