John Matthew Stafford is an American football quarterback who is currently signed to the Los Angels Rams of the National Football League (NFL). Finished his collegiate career at the University of Georgia, he was picked by the Detroit Lions in the 2009 NFL Draft in round one.

Tampa, Florida native, Matthew Stafford was born on 7th February 1988, under the star sign Aquarius. The thirty-three years old holds an American nationality and is of white ethnic background. Regarding his physique, he stands 6 ft 3 in (1.91 m) tall and weighs 220 lb (100 kg).

He is the son of John Stafford and Margaret Stafford. Raised in Highland Park, Texas, where he attended Highland Park High School and began playing football. He has a younger sister named Page.

How Much Is Matthew Stafford's Net Worth In 2020?

As of 2021, his net worth is approximately $200 million. Stafford Listed his stunning Michigan mansion following his trade to LA Rams for $6.5 million.

Matthew Staford was picked #1 in the 2009 NFL Draft by the Detroit Lions, becoming the first overall pick of the Draft. In 2012, he recorded the most passing attempts in a single season: 727. In the 2015 season, he became the first player in NFL history to complete 60% or more of all passes in each game a season. The following season, he was 4th Quarter comebacks in a single season: 8 in 2016. Further with Detroit, he has won the 2011 NFL Comeback Player of the Year, the 2014 Pro Bowl, and the 2008 First-team All-American.

Matthew Staford's Wife: Is He Married?

Los Angeles Ram's quarterback is married to cheerleader Kelly Hall, a sister of former NFL player, Chad Hall, who is now a wider receivers coach at Buffalo Bills. Stafford and Kelly met at Georgia University where he was a star football player and Kelly, a cheerleader for the Bulldogs. The college sweetheart exchanged the vows in the Foundry at Puritan Mill in Atlanta, Georgia on 4th April 2015. 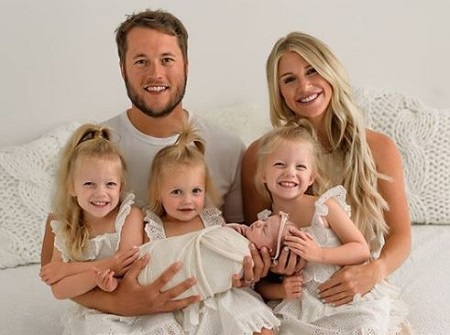 In 2017, the couple had their first children: twin girls, Sawyer and Chandler. The following year, their third child, Hunter was born.

In April 2019, Stafford's wife disclosed on Instagram that she was discovered with a brain tumor. On 21st April, she underwent a 12-hour surgery. Since training camp started up shortly after kelly's surgery, he took leave from the Lions. Kelly had to re-learn how to do things like turn her head and walk down the stairs.

In June 2020, The Staford family welcomed the newest member of their family, Tyle.