Jared Goff is an American professional football quarterback who plays in the National Football League for the Los Angeles Rams. He played college football at California and was the Rams' first overall pick in the 2016 NFL Draft.

Jared Goff's Salary and Net worth

Jared Goff is reported to have an estimated net worth of $16 million as of 2022. Jared's 2022 base salary would be reduced from $10.6 million to $1 million. Goff would go from currently having $15 million in guaranteed money to securing $40.1 million. 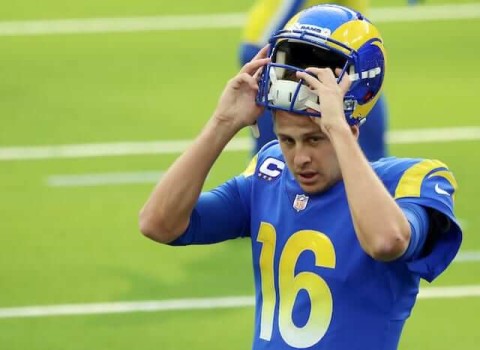 CAPTION: Jared played in the NFL with the Rams until 2020 SOURCE: Newswire Rams

Furthermore, his total career earnings are reported as $108,891,068Goff has been one of the inspiring names and very successful in his career. He is handsome and dashing. He has a great height of 6 feet and 4 inches. His bodyweight is 205 lbs.

He is popularly connected with social networking sites such as Instagram and Twitter. Details info about his life and bio can be taken from Wiki.

Jared Goff was born by his name Jared Thomas Goff on October 14, 1994, in Novato, California. He holds citizenship in the United States and belongs to the white ethnicity. His astrological sign is Libra.

Goff is the son of Jerry Goff and Nancy Goff. His father was also a prominent player of baseball. It seems he is a single child of his parents.

Jared attended Marin Catholic High School for his high schooling education. He also played football while studying there. He got an offer of scholarships from several colleges in the United States.

He received scholarship offers from Boise State, Fresno State, and Stanford Cardinal football. However, he chose the scholarships from the University of California, Berkeley, and played for the Golden Bears team.

Goff was picked first overall in the 2016 NFL draft by the Rams and signed a four-year deal worth $27.9 million. He soon made a place in the starting lineup replacing veteran quarterback Case Keenum.

Jared Goff got more playing time with new head coach Sean McVay in 2017. In 2018, he was named to the Pro Bowl in replacement for injured Carson Wentz.

After being famous and successful, Jared Goff has adequately managed to keep his private life very secret. He has revealed nothing to his fans and viewers regarding his love affairs, not even his relationship status.

Extremely active on social sites such as Instagram, Twitter, and Facebook, he has not posted a single picture with a lady assumed to be his possible spouse or girlfriend. Indeed, he is not a married man now, or he is too young to enter into married life. He does not have children either.

He is not dating anyone and doesn't have a girlfriend as he responded by saying “No girlfriend” in January 2018 while asked if he is dating anyone. He also revealed that he has no plans of getting married soon.